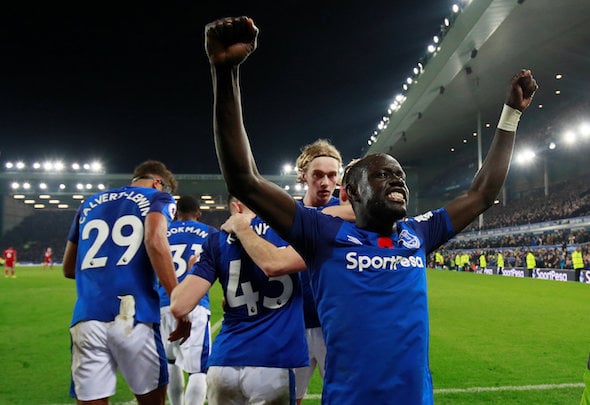 Everton striker Oumar Niasse is set to leave Goodison Park this January, as a host of Premier League clubs have declared their interest in the Senegalese international, according to a report.
The Guardian reports that Everton value Niasse at £13million, with West Brom, Crystal Palace and Brighton and Hove Albion showing interest.
The 27-year-old boasts a good goal scoring record this season, having found the net six times in his fourteen appearances for the Toffees, with a goal coming every 101.6 minutes.
The Guardian state that each of the listed clubs are happy to pay the £13million asking price, so it is up to the Senegalese native to choose his next club, based upon which team can offer him the most minutes.
The signing of Cenk Tosun has effectively ended Niasse’s career at Goodison Park, but his Premier League days do not seem to be over.
Football Insider verdict:
Oumar Niasse has been a threat this season for the Toffees, but with new signing Tosun seemingly coming in to be the Club’s out and out striker, the playing time seems as though it will only decrease. Goal thirsty West Brom is the obvious destination, as the Club are desperately thin in attacking quality, and are currently 19th in the table. Alan Pardew is going to need all of the goal scorers he can get if he is to keep the Albion in the League, and nobody at the Hawthorns boasts a minutes-per-goal ratio anywhere near as good as Niasse does.
In other Everton transfer news, one Everton loanee has been spotted back at Goodison Park following an injury scare.
We’ve launched a << BREAKING NEWS FEED>>exclusively for your club. ‘Like Us’ on Facebook by clicking here if you want 24/7 updates on all Everton breaking news.