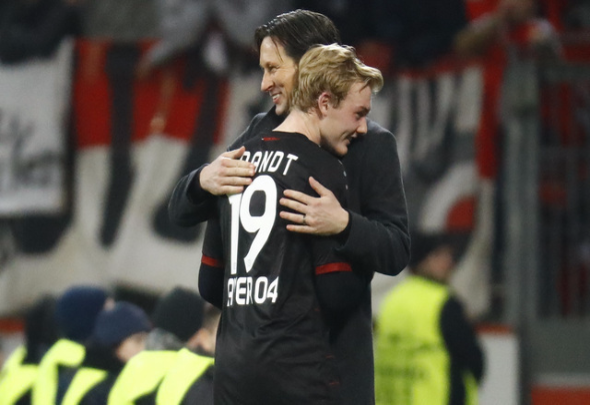 Bayer Leverkusen winger Julian Brandt has emerged as a priority target for Liverpool, according to a report.

The Daily Mail has claimed that manager Jurgen Klopp is determined to add two wingers in the summer and one of his main targets is the 20-year-old Germany international.

It is claimed that the young starlet will be a priority when the window opens in a few months time and it is expected that the task of signing him will be more straightforward due to how Leverkusen are performing in the Bundesliga.

The German outfit are sat all the way down in ninth place in Germany’s top flight and are unlikely to see European football next season with 11 points separating them from sixth.

Meanwhile, the Reds are enduring a poor run which has seen them drop down to fifth place after not picking up a league victory in 2017.

It is stated that Klopp is now looking to make firm plans for the future and the report also states that Liverpool are monitoring Leicester’s 20-year-old wideman Demarai Gray.

Both Brandt and Gray play on the left-wing which is a position usually held by star Philippe Coutinho in the team.

But, the team severely missed the Brazilian when he was injured earlier in the campaign and Klopp may be looking for bright young prospects for the future.

Brandt and Gray would certainly be good signings for Liverpool on paper due to their ages and potential. However, both of the players struggle for consistency and Gray especially looks like he could be another Nathan Redmond or Aaron Lennon, which quite simply isn’t up to the Reds’ standards. With just three goals and five assists to his name in 29 appearances this season, last years Premier League champions Leicester would have been expecting a lot better. Meanwhile, Brandt has similar stats with a return of three goals and six assists in 25 appearances. There is definitely a case that the Reds should sign one of them, but they would not be able to fit both of them into their squad and they are still far from being first choice starters for Liverpool if they do sign.

In other Liverpool transfer news, Mark Lawrenson has predicted the Reds’ Saturday clash against Tottenham.