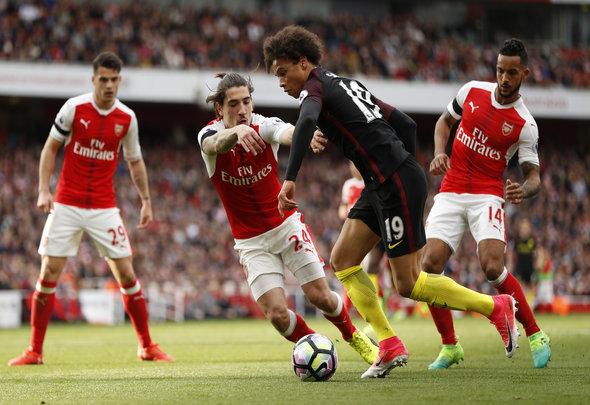 Arsenal defender Hector Bellerin once again continued to be a problem for his side this season and has seen his form drop considerably. The 22-year-old emerged as one of the most exciting young full-backs in Europe during the past few years, but he has been nowhere near his standard this campaign. He was at fault for the opening goal against Man City, with poor positioning awareness allowing Leroy Sane to score. Bellerin struggled all match against the speed of Sane and looked a major liability. He has also become recognised for his attacking attributes, but teammate Nacho Monreal looked the greater threat at left-back.

Arsenal need to go out in the summer and improve their options in the central midfield area. Granit Xhaka was a big-money signing in the last summer transfer window, but he has been unable to impress and his disciplinary record is poor. Meanwhile, Francis Coquelin is a steady option in the Premier League, but is not the sort of player who can guide you to a title. Current leaders Chelsea have the likes of Nemanja Matic, N’Golo Kante and Cesc Fabregas to choose from, something that puts Arsenal’s choices to choose from. The Gunners need some extra quality in the middle of the park to dominate their games.

Arsenal’s chances of finishing in the top-four is become increasingly worrying and they needed to win at home to Man City. They did extremely well to come from behind on two occasions, but the pressure on manager Arsene Wenger will continue to exist. The Gunners are seven points adrift of the Champions League spots and will need a great winning run to bridge the gap. Arsenal must still play Manchester United and Tottenham in the Premier League, meaning it’s going to be very difficult to build up some momentum.

In other Arsenal team news, Darren Fletcher has claimed it was a sad day when the Gunners signed Danny Welbeck.