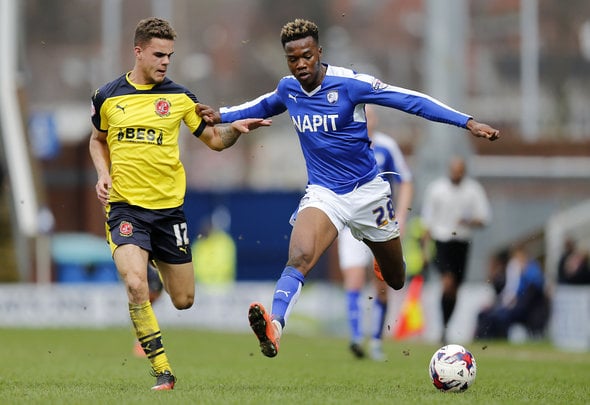 Chesterfield attacker Gboly Ariyibi is undergoing a medical at Nottingham Forest ahead of a deadline day move, according to a reliable journalist.

Sun correspondent Alan Nixon reported on his personal Twitter account on Tuesday morning that the right-winger was a target for the famous club.

Now, Paul Taylor, a journalist for the Nottingham Post has shared on his personal Twitter account that the 22-year-old is at the club for talks and a medical.

@nottmtails Chesterfield winger Gboly Ariyibi is another #nffc hope to get over the line… he’s at the club for talks/medical now.

Ariyibi has played in 36 encounters for Chesterfield in all competitions this campaign, bringing a return of just four assists.

He has played just twice at Championship level before when at Leeds, while he was a product of the famous Southampton academy.

The United States born player is known for his pace and trickery in League One and could be an up and coming star from the lower leagues after originally dropping down.

Forest will be keen to secure some signings on deadline day to help take them out of a poor position as they sit 19th in the English second tier.

Ariyibi is a favourite for a club such as Chesterfield, but there will be questions asked as to whether he can make the step up to the Championship. The player is quick skillful and one that fans love to watch. However, his final ball is often lack, which can also cause some supporters frustration. He is very much a player similar to that of Michail Antonio and if Ariyibi can perform half as well as the now West Ham man can then fans will be delighted. It is crucial that Forest make some deadline day signings to take them out of their current slump.

In other Nottingham Forest transfer news, the club are looking for a reunion with this 31-year-old.