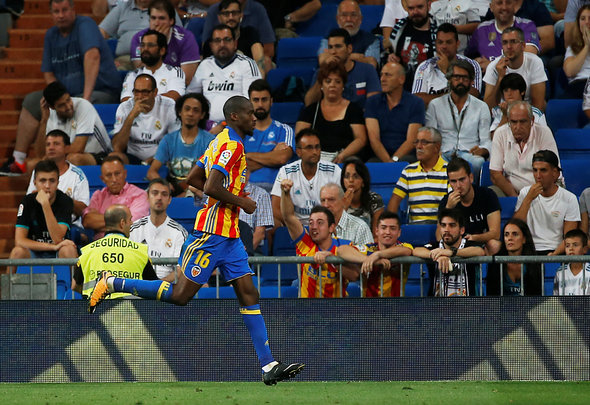 Valencia have already agreed a £22million fee to sign Inter Milan midfielder Geoffrey Kondogbia on a permanent deal when his loan expires at the end of the season, according to a report.

Spanish news outlet Marca claims that Tottenham and Arsenal are both keeping close tabs on Kondogbia, 24, but the France international has decided hat he would rather remain at Valencia after a brilliant start to the season in La Liga.

Sky Sports has recently reported that Spurs have deployed their scouts to keep close tabs on Kondogbia with the view to him being a long-term replacement for Mousa Dembele.

It is understood that the former Monaco star is about to enter the final 18 months of his contract at the San Siro and could exit Inter Milan on a permanent basis next summer.

Since joining Valencia, Kondogbia has scored three goals in 12 La Liga appearances and is known for his commanding physical presence in the centre of midfield.

The midfield colossus, who stands at 6ft 2, is reported to be surplus to requirements by Inter boss Luciano Spalletti.

It seems that Tottenham’s chances of signing Kondogbia next summer have gone up in smoke unless they tempt Inter Milan into accepting a bigger offer. However even then, Valencia may still be in the driving seat to bring in the France international with the player seemingly happy at the Mestalla. Mauricio Pochettino needs to add more strength in depth to his side and planning for life after some of the more senior players pass their peak is a good plan to make. Juan Foyth looks like he could be someone to replace Jan Vertonghen in the future while other young starts such as Marcus Edwards and Kyle Walker-Peters are waiting in the wings to one day make the step up.

In other Tottenham news, a manager has made a huge admission about this attacker who is a target of Spurs.