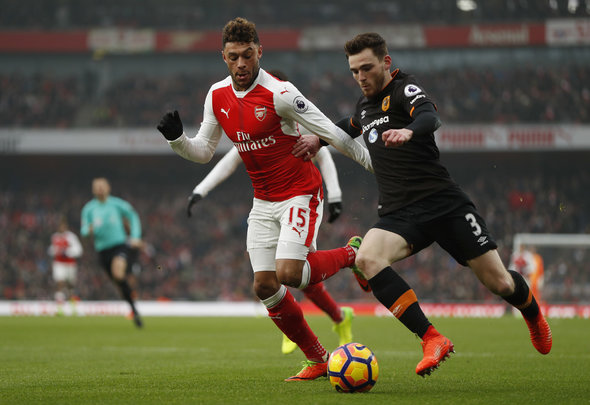 Senior Arsenal player Alex Oxlade-Chamberlain is considering quitting the north London club for Liverpool this summer, according to a report.

The Telegraph have claimed that the 23-year-old Gunners attacker is uncertain of his future as he awaits a contract offer from Arsenal with his current deal set to run out in the summer of 2018.

It is detailed that Liverpool are interested in acquiring his services and are watching developments closely.

But, it is also said that Chamberlain is ready to push for a move from one top-four rival to another if negotiations with Arsenal fail to advance.

The report does however state there are still some obstacles in the way of the transfer with Chamberlain being valued at £25million one of them, while the possibility of a new Arsenal manager could also get in the way for Liverpool.

Chamberlain is a frequent starter for the Gunners and has played in 43 mathces for the north London club in all competitions this season, scoring six goals and 11 assists.

But, Liverpool may be ready to pounce if his future isn’t secured in the next few months.

This deal is reminiscent of the James Milner one in that both players were looking to leave their respective side’s in order to play in the centre of midfield, rather than out wide. However, the problem with both players is that they simply aren’t good enough to play in the centre of the park for a team of Liverpool’s standards. It is also a bizarre way of thinking for a player like Chamberlain with his career forming at Southampton as a pacey winger and that is what initially brought Arsenal to shell out £12million for his services. Now, Chamberlain could work out to be a very smart signing for Liverpool, but he would also be a big risk, especially for the reported £25million fee and the Reds may be better looking elsewhere.

In other Liverpool transfer news, the Reds are edging closer to this quickfire transfer with Manchester United left trailing.