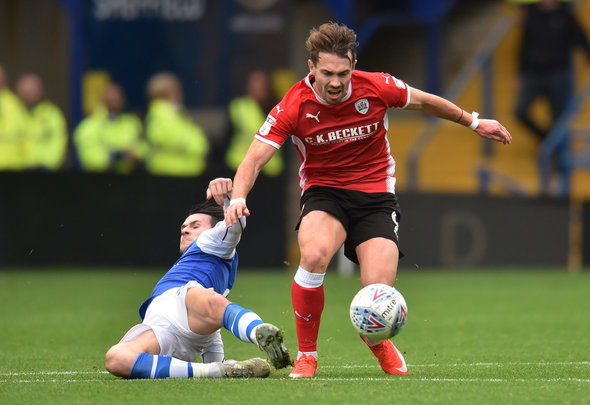 Barnsley striker Tom Bradshaw is a doubt for his side’s clash against Leeds United at Oakwell on Saturday after he was involved in a car crash on Wednesday night, according to a report.

Sky Sports claims that the 25-year-old is now facing assessment ahead of this weekend’s Championship action after what Tykes boss Paul Heckingbottom described as a “nasty” car crash that resulted in the vehicle being written off.

Heckingbottom has revealed that the Wales international missed training on Thursday after suffering a bruised back, but he is hopeful that he will feature against Leeds on Saturday.

“It was a nasty one and his car was written off,” he said, as quoted by the Express and Star.

“He has got a bruised back and things like that, so he didn’t train Thursday.

“But he is adamant that he will be alright. Sometimes, the stiffness and soreness comes the day after, but hopefully he will be ok.”

Bradshaw has been ever-present for Barnsley this season and if he was to miss the game against Leeds it would no doubt be a major blow for his side.

The ex-Walsall striker has scored seven goals in 20 appearances across all competitions this term, featuring in every possible game across the Championship and the League Cup.

Barnsley aren’t the only ones worrying about the fitness of a striker ahead of their game with Thomas Christiansen’s side.

Pierre-Michel Lasogga is likely to miss a third game in a row after suffering an injury in training despite recovering from a brief illness.

Kemar Roofe is expected to lead the line in the German’s absence.

In other Leeds United news, fans have torn into this “amateurish” player for his performance against Wolves on Wednesday.