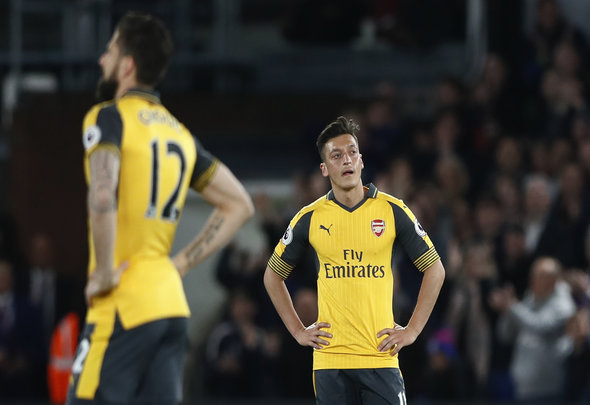 Arsenal midfielder Mesut Ozil may face having to back down from a contract dispute after his potential availability has not seen much interest from big clubs.

After signing for Arsenal for £42million the club was expecting there to be a lot of interest and possibly a bidding war for the player, but this hasn’t proved to be the case.

Turkish outfit Fenerbahce is the only European club said to be interested and they would be unlikely to match what Arsenal are currently offering.

The Germany international has offers from the Middle East and China too, but according to the report he is not interested in them.

Ozil played 90 minutes as Arsenal crashed to a 3-0 defeat to Crystal Palace at Selhurst Park.

The result leaves the Gunners in sixth, level on points with Everton in seventh, and three points adrift of Manchester United who occupy fifth place.

He has 10 goals and 11 assists in his 34 league and cup appearances this term, though the midfielder has only netted once in the Premier League since the turn of the year.

It is still early days yet and top clubs would be unlikely to start a bidding way yet for a player that could command a huge transfer fee. It’s likely to that if he hasn’t signed a contract in the summer that clubs will come calling but it will prove to be a game of brinksmanship with suitors hoping his problems at Arsenal could lead to him being available for a bargain price. However, given Wenger’s stubborn streak in the transfer market that is unlikely to happen. Additionally, rumours are picking up pace that Wenger has decided to stay at the Emirates and that could mean Ozil signs a new deal and gives it at least one more year at the club. If he can get back to the form he showed last season, that would be fantastic news for the Gunners.

In the other Arsenal news, this Arsenal £30million flop could be the worst signing of all time according to Tony Cascarino.