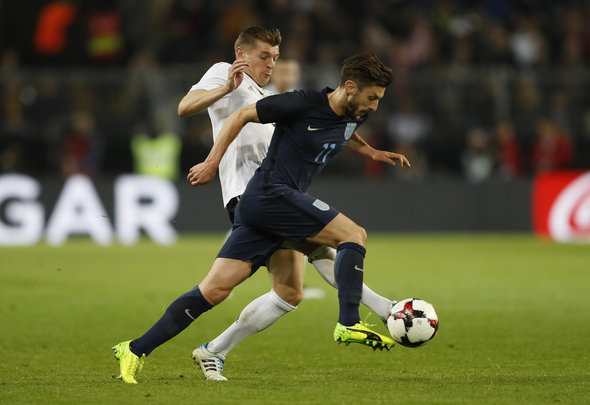 Adam Lallana was delighted by the performance of reported Liverpool target Michael Keane on his senior international debut.

Keane was selected to start by Gareth Southgate in an international friendly against Germany on Wednesday night.

The result wasn’t one to remember though as England fell to a 1-0 defeat courtesy of a Lukas Podolski stunner.

However, there were a number of standout performances from England’s inexperienced international players.

The Daily Mail claimed that Jurgen Klopp is hoping to bring the newly-made England international to Anfield in the summer in a bid to cure his side’s poor defensive record.

Everton, Manchester City and Leicester are also in the hunt for Keane’s signature.

Lallana, 28, gave a glowing review of Keane’s Three Lions debut and thinks that it’s great for English football as a whole that the Burnley centre-back played so well.

“I thought Keane was outstanding today to come here and play the way he did against an opposition like that,” said Lallana after the game on Wednesday to Sky Sports.

“Credit to himself and it’s great for English football that he came in and performed so well.

“There are a lot of positives this evening – obviously the result not being one.”

Keane has taken part in every minute of Burnley’s Premier League and FA Cup campaigns this season making a total of 33 appearances – only Steve Cook, Ben Foster, Gareth McAuley, Lukasz Fabianski and Ben Mee have achieved a similar feat in the league.

He was a product of  the Manchester United academy and had loan spells at Leicester, Blackburn and Derby before joining the Clarets on a permanent deal following an impressive temporary stay in 2015.

In other Liverpool news, the club have made an reportedly approach for this proven Premier League attacker.