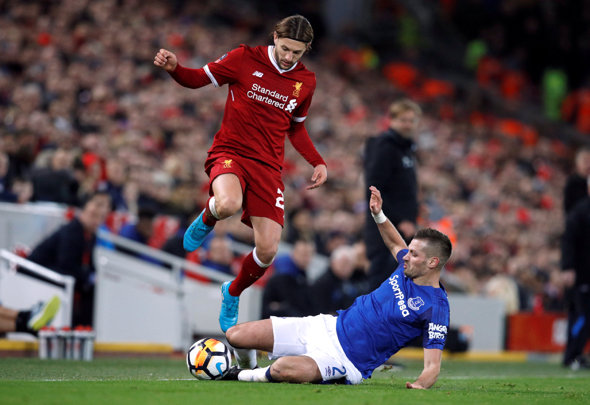 Adama Lallana was sent off in the Liverpool Under-23s game against Tottenham on Monday, but will escape any first-team punishment, according to a report.
However, Liverpool fans are not amused by his on-pitch reaction and feel he’s lucky to avoid more serious punishment.
Lallana reacted badly to an aerial challenge with Spurs player George Marsh and was shown a straight red card after grabbing the young midfielder round the neck.
Sky Sports has reported that the player will not receive a first-team ban as any punishment will be confined to the Under-23s competition.
Lallana is still on the comeback trail after spending the majority of this season out with a hamstring injury.
And while he won’t face a first-team ban, not being able to play for the Under-23s could hamper his recovery as he looks to regain match fitness.
Irrespective, Liverpool fans are not impressed with his behaviour, with one saying that he should have been setting an example to the younger players that were looking up to him.
Here is a selection of the best reactions from Liverpool fans:

Lallana (rightly) only banned for U23 matches. Makes logical sense as that is the competition it was given in, otherwise it makes a right mess of what matches count during the suspension. https://t.co/jPlY417xzV pic.twitter.com/MIlRXBNESi

As a Liverpool fan I agree with you! He should be banned for 3 games! Can not condone this sort of behaviour!

If the punishments go into prem games clubs aren’t going to sanction them to play, who loses out then? The youngsters. Just leave it as it is

Jim , not right but when someone is kicking lumps out of you , injuries in the back of his mind , you can make mistakes, U23s is a different level so don’t be silly

The more I see of the Lallana red the more embarrassing it is. Screams of a jumped up pro thinking he is something special, taking the jump with a youngster having the audacity to challenge him….Tit.

And yes, Lallana lost his plot completely and should be punished accordingly. How about that LFC haters? 😎

Lallana's situation same as Wilshere's last year. He'll get a 3 match non 1st team ban. It won't affect his availability for 1st team. Fact he actually assaulted the kid was just unacceptable in my eyes. He's meant to be the mature one in that exchange. very poor & inexcusable

In other Liverpool news, the Merseyside giants have pounced to sign a £90,000-a-week proven Premier League ace available for nothing in a few weeks.