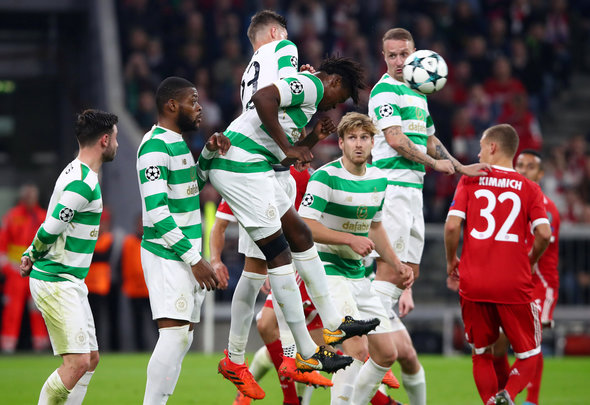 Celtic defender Dedryck Boyata has revealed he is running on adrenaline as the Hoops’ packed fixture list takes it’s toll on the player.

The Hoops take on Aberdeen at Pittodrie on Wednesday night having played Bayern Munich in the Champions League and Hibs in the Scottish League Cup over the last seven days.

Injuries to other defenders at Celtic – like Jozo Simunovic and Erik Sviatchenko – has forced manager Brendan Rodgers to throw Boyata in constantly despite only recently recovering from injury himself.

Boyata has played every minute of the last seven games for Celtic and admits he is feeling fatigued after the gruelling start to the campaign.

The Belgium international missed the opening two months of the season after he suffered a medial knee ligament injury during a pre-season friendly with Slavia Prague in July and has now suggested that all of the action is catching up on him.

He added: “With the situation we’re in with a lot of injuries, when it comes to managing myself and how much I play, if the other centre-backs had been there, then maybe it would have been different.

“But the manager [Brendan Rodgers] has 100 percent faith in me and he would never risk me.

“If he felt I wasn’t ready, he wouldn’t put me on the pitch.

“The adrenaline keeps you going in a way.”

Celtic travel to Pittodrie to face Aberdeen on Wednesday night as two top sides in the Scottish Premiership go head-to-head for the first time this season.

The two sides are level on points at the top of the table and a win at Pittodrie would see Celtic open up a three-point gap over Derek McInnes’ side.

In other Celtic news, Derek McInnes has issued a stern warning to the Hoops ahead of their clash with Aberdeen on Wednesday.