Gabby Agbonlahor has backed Leigh Griffiths to reject a potential move to Aberdeen and stay at Celtic.

Speaking exclusively to Football Insider, the ex-Aston Villa and England striker insisted the 30-year-old will want to fight for a chance under the new manager.

The Sunday Post report the Dons are keen on signing Griffiths after signing his Hoops teammate Scott Brown in March. 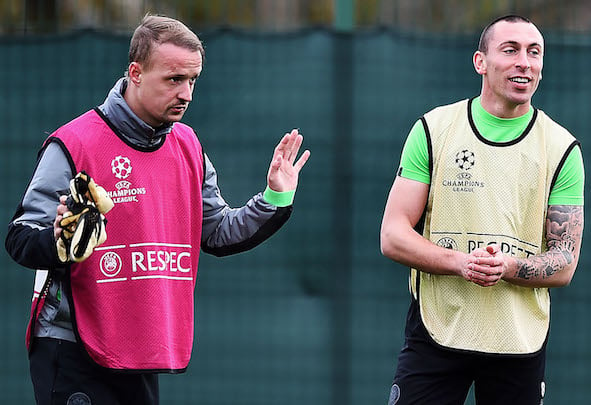 Brown will join Aberdeen in a player-coach role in the summer after his former Hibs teammate Stephen Glass was appointed as manager.

Aberdeen are in desperate need of a striker after the blockbuster sale of Sam Cosgrove to Birmingham City in January.

Griffiths has been limited to just seven league starts this season but has still managed to find the net on six occasions in 20 appearances across all competitions.

Asked whether he could be tempted to move to Pittodrie in order to find regular football, Agbonlahor told Football Insider correspondent Connor Whitley: “To leave a club like Celtic to go to a club like Aberdeen I think would be hard for Leigh Griffiths.

“He looks like a player who loves Celtic. I’m sure a new manager coming in will mean it’s a fresh start for everyone, he’ll want to work for a starting place.

“I think he’ll wait. He’s got another year on his contract. I don’t see him leaving, to be honest.”

Griffiths has played over 250 games for the Hoops since his move from Wolves in January 2014.

The Edinburgh-born ace has scored 122 goals and laid on 55 assists in that time.

In other news, a Celtic star is “desperate” to quit as a “massive club” line up a bid, according to a top pundit.