Gabby Agbonlahor has heaped praise on Jordan Pickford for getting “back to his best” at Everton.

Speaking exclusively to Football Insider, the ex-Aston Villa and England striker insisted the goalkeeper has been “outstanding” in recent weeks and “deserves his plaudits”.

The 27-year-old made three saves at Goodison Park in Everton’s 2-1 loss to Aston Villa on Saturday night, according to sofascore. 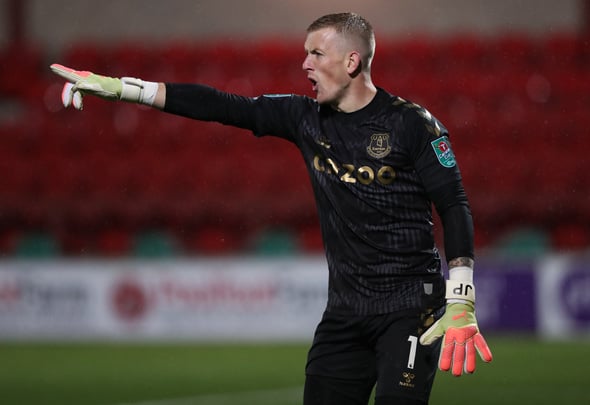 He was only beaten due to a mistake from defender Mason Holgate and a wonderful finish from Anwar El Ghazi.

In Everton’s previous game he kept his first clean sheet since returning from injury in their 1-0 win over Arsenal at the Emirates Stadium.

Speaking after that game, Carlo Ancelotti told Sky Sports: “Jordan did really well, he had a good save at the end, he was comfortable, good with the ball. His performance was really good.”

Asked for his assessment of the England international’s recent performances, Agbonlahor told Football Insider correspondent Connor Whitley: “He’s back to his best.

“He deserves his plaudits, he doesn’t normally get them when he plays and he deserves it because he was outstanding.

“At the moment, definitely, he’s England’s number one on form.

“Credit to him, he hasn’t hidden. He’s come out and fought the challenge he’s had and he’s done really well.”

Pickford has kept seven clean sheets in 26 Premier League appearances for the Toffees this season.

In the previous two campaigns, he kept nine clean sheets without missing a minute of league action.

In other news, Kieran Maguire has dropped Everton boardroom bombshell amid “whispers and threats”.