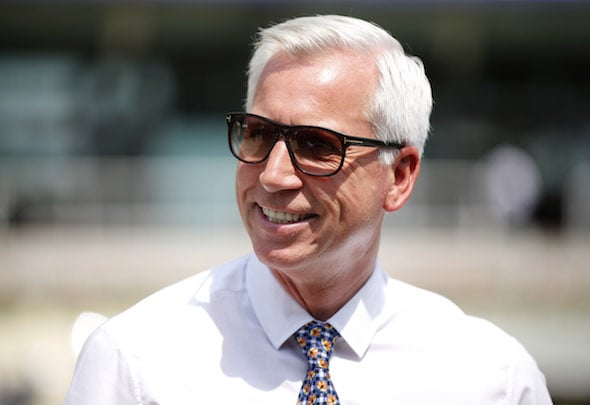 Former West Ham boss Alan Pardew has claimed that if was Tottenham manager, he would axe Serge Aurier from the first-team when they travel to APOEL Nicosia in the Champions League on Tuesday night.

Aurier, 24, was shown a red card in Spurs’ 3-2 win over the Hammers on Saturday and his reckless lunge on Andy Carroll while already on a yellow card could have proved costly as it sparked the hosts into life at the London Stadium.

Tottenham were 3-1 up at the time of the right-back’s dismissal but Slaven Bilic’s side managed to claw themselves back into the game and came very close to bagging a last-gasp equaliser in a frantic London derby.

Now, Pardew has called on Pochettino to drop Aurier and not even pay any attention to him until at least after the midweek European fixtures.

“Jamie [Redknapp] called it during the first half that this guy would get sent off. If I was the manager on the sideline I would have taken him off before the booking.

“[The second yellow card] is truly unacceptable when you have already been booked. It’s not even in a desperate area of the pitch – it’s not in your final third. I can’t imagine what Mauricio Pochettino thinks of that.”

Aurier’s red card means that he would be available for the Champions League game against APOEL this week, but would serve a one-match suspension for the trip to Huddersfield next weekend.

The full-back signed for Spurs from Paris Saint-Germain in the summer as a replacement for Kyle Walker, who left for Manchester City for £54million.

He played more of a wing role against West Ham on Saturday as Pochettino deployed a back three formation.

Tottenham ace Aurier has made three appearances across all competitions for the Londoners since signing and played a major role in the impressive 3-1 win against Borussia Dortmund in the first European game of the season.

In other Tottenham news, Tim Sherwood has torn into this Spurs player after this weekends action.