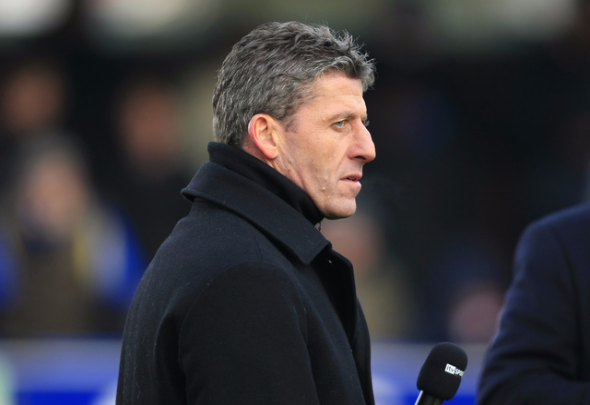 Former footballer turned pundit Andy Townsend has hit out at sections of the West Ham fan base and labelled them “deluded”.

The Hammers are currently struggling in the Premier League in 14th place with just six points separating them from Hull in 18th.

Over the years the east London club’s support have been urging the club to progress up the English pyramid while playing proper football, fans have called the ‘West Ham Way’.

It is believed that former boss Sam Allardyce ultimately lost his job for playing in an not so pretty way and he slammed Hammers supporters back in 2015, calling them “brainwashed”.

Now, Townsend has taken a similar approach and believes portions of the West Ham support are deluded for thinking the way that they play is more important than results out on the pitch.

“It’s whichever way you want to look at it,” started Townsend speaking to BBC Five Live on Monday evening.

“Now, that’s what Sam’s saying ‘get real, get real’ you want to survive and you want to play regular Premier League football then we’ve got slug it out with everybody else.

“So, whatever West Ham historically have done, I think personally is I come from that school of thought. I know that Slaven as much as he would like to play, his first duty is to win, just to get over the line.

“If fans only want to see their team go and play wonderful football and aren’t bothered about results then I’m afraid that they are deluded.”

Slaven Bilic is under pressure in East London.

West Ham only returned to the Premier League in 2012 after spending a season back in England’s second tier.

They have since moved into their new London Stadium while entering the qualification stages of the Europa League twice.

However, this season has not gone to plan so far and Slaven Bilic’s side have another tough test coming up on Wednesday evening in the form of London rivals Arsenal.

In other West Ham news, the Hammers are planning a summer move for this £17million Premier League striker.