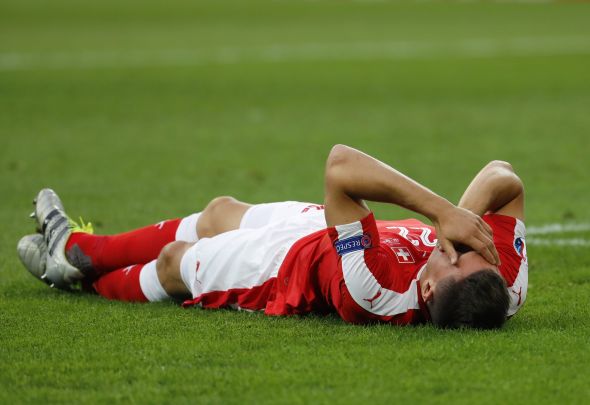 Hoffenheim centre-back Fabian Schar is one of the names on Arsenal’s shortlist to replace Per Mertesacker, after the German was ruled out for five months.

Sky Sports reported on Tuesday that The Gunners’ captain could be ruled out until the new year after suffering a knee injury against French Ligue 2 outfit Lens on Friday.

The Daily Mirror have now reported that Schar is in line to replace Mertesacker, as manager Arsene Wenger compiles a shortlist of centre-backs to fill the void.

The 24-year-old has emerged as one of Europe’s up-and-coming centre-backs after performing well alongside former Arsenal defender Johan Djourou during Switzerland’s Euro 2016 campaign.

The Gunners have already signed one Switzerland international this summer, bringing in Gladbach star Granit Xhaka for around £30million.

The former Basel centre-back made 24 Bundesliga appearances last season for Die Kraichgauer, as his side narrowly avoided relegation finishing in 15th place.

Hoffenheim’s young manager Julian Nagelsmann is under no pressure to sell his star defender, who has set up an impressive partnership with young German star Niklas Sule. The defender has three years remaining on his contract at the Wirsol Rhein-Neckar Arena.

Schar, who stands at 6ft 1in, has a remarkable scoring record for his national side; finding the back of the net once in almost every three games. He has scored seven goals in 24 Switzerland appearances.

In other Arsenal news, Inter Milan have made a decision on the future of their star-striker Mauro Icardi.