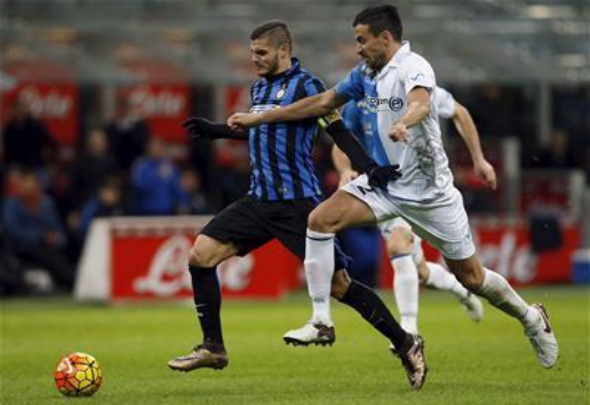 Arsenal have received a huge blow after striker target Mauro Icardi has revealed that he wants to stay at current club Inter Milan.

Icardi has been linked with a number of big-money moves this summer and was reportedly scheduled to hold talks with the Gunners this week.

It was also revealed that the forward’s wife and agent Wanda Nara was in London on Wednesday.

Nara has been vocal about Icardi’s situation, claiming he is underpaid at Inter and that he could get a better deal elsewhere.

But the player poured cold water on the possibility of an exit and revealed he wants to heal the wounds with Inter chiefs.

“I am here and I am happy here. That’s what I’ve always said. I have a contract with Inter until 2019, they’re my club,” said Icardi to Gazzetta dello Sport, as quoted by the Mirror.

“My family’s objective is to stay in Milan. I’ve never hidden the fact that my family is happy here and that goes for Wanda and the kids.

“Milan is our home. This is the reason why she is talking to the club. The aim is to find a solution.

“I’m not interested in rumours and I don’t give a lot of weight to what is said and written in the media. Everyone knows my intention [is to stay].”

The 23-year-old was made captain under manager Roberto Mancini last season but failed to help the club return to the top of Serie A.

The former Sampdoria striker bagged 16 goals and four assists in Serie A for the Italian giants last season, but was left out out of the highly competitive Argentina squad for this summer’s Copa America.

Arsenal manager Arsene Wenger is keen to bring in a striker this summer, having been linked with Lyon’s Alexandre Lacazette and AC Milan’s Carlos Bacca, after losing out on Premier League champion Jamie Vardy.

Icardi has three years remaining on his San Siro deal and it now looks almost certain that he will start the season with the Italian giants.

In other Arsenal transfer news, the Gunners have been told to look elsewhere after Borussia Dortmund’s sporting director revealed Matthias Ginter will stay and fight for his place.