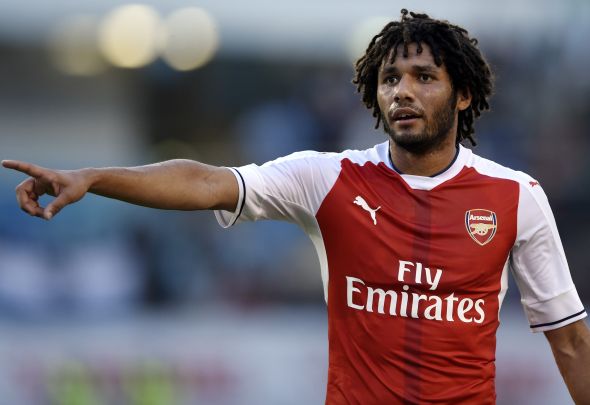 Arsenal are set to be without first-team midfielder Mohamed Elneny for over a month as he takes part in the African Cup of Nations, according to a report.

The Evening Standard claim the 24-year-old has been named in Egypt’s preliminary squad for the international tournament, meaning he could be unavailable between January 15 and February 5.

If included in Hector Cuper’s final squad, he could miss at least four of Arsenal’s games – including a potentially title-deciding clash with Chelsea on February 4.

He would though, barring an injury, be back in contention for the Gunners’ Champions League knockout-round tie with Bayern Munich.

Arsenal boss Arsene Wenger will have expected the news to break at some stage, but his departure doesn’t make his midfield dilemma any easier.

Wenger is already without the injured Santi Cazorla with a hamstring injury, while Aaron Ramsey is currently nursing a thigh problem. That leaves Wenger with just two senior first-team central-midfield options in Francis Coquelin and Granit Xhaka.

The option is available for Wenger to recall Jack Wilshere from his loan spell at Bournemouth, but given how well his performing he may prefer for him to continue where he is.

There are younger options available also, including Ainsley Maitland-Niles, Jeff Reine-Adelaide and Gedion Zelalem, who have all featured in cup competitions this term.

Alex Oxlade-Chamberlain could also slot into a deeper midfield role, but that could disrupt his impressive recent run of form; plus, he and Elneny have a completely different role in the side.

Elneny has made 17 appearances in all competitions this term, and has established himself as one of Arsenal’s key players.

In other Arsenal news, Paul Merson has given his verdict on the return of Danny Welbeck to the side.