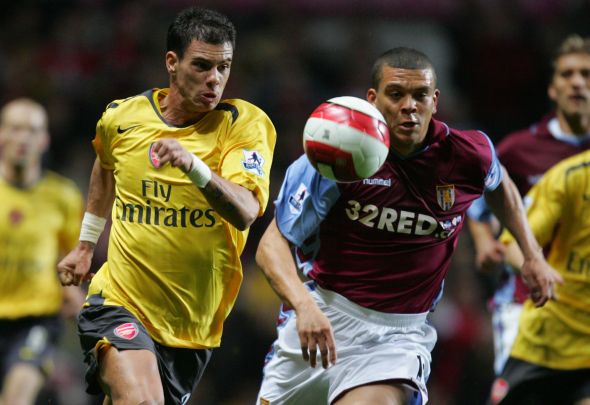 Arsenal fans are currently feeling a sense of déjà vu on Twitter after former Gunner Jeremie Aliadiere re-signed for French side Lorient.

The 33-year-old rejoined Lorient after becoming a free agent following his release from Qatari outfit Umm Salal and will provide cover for suspended star striker Benjamin Jeannot, who was given a 10-game ban for pushing a referee.

The French outfit revealed the news via their official website, with the ex-Gunner signing a one-year deal with the option of another year. The tweet is translated as “Jeremie Aliadiere undertakes a year with the FC Lorient.”

Aliadiere, who has also had spells with Celtic, Middlesbrough and West Ham, scored just five goals in 45 league and cup encounters for Arsene Wenger’s side.

Fans have reminisced over his time with the Gunners, where he largely played second fiddle to the likes of Thierry Henry and Dennis Bergkamp.

The Ex Arsenal player I hated facing was Jeremie Aliadiere….He was scoring or pulling that A1 performance against us😢

Bro when United were signing RVN Arsenal were busy signing and developing Aliadiere. Wenger has been insane for long. We didn't realize

Jeremie Aliadiere, that's a blast from the past. #AFC

One fan even compared the striker, who has seven France under-21 caps, to flop Francis Jeffers.

aliadiere because he was stuck with for so long, like Franny Jefferses

The striker could make his debut as soon Wednesday night against Guingamp, as the side look to improve from their poor start to the season that has seen Lorient lose four out of their first five fixtures.

In other Arsenal news, this man was reportedly in talks with the Gunners throughout the majority of the transfer window.