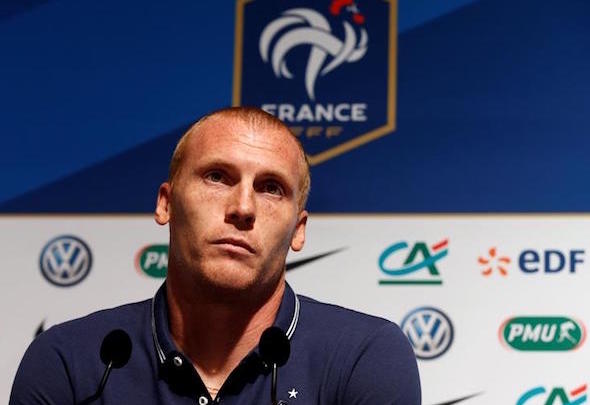 Arsenal fans are not impressed after Barcelona veteran Jeremy Mathieu was reported to be high on manager Arsene Wenger’s shortlist.

Manager Arsene Wenger is looking to solidify the Gunners’ centre-back options after a spate of pre-season injuries have left them without Per Mertesacker and Gabriel for the opening few months of the Premier League campaign.

French broadcaster SFR Sport have claimed that the Gunners have been in talks with the Spanish giants in recent days about a deal to land Mathieu.

Arsenal’s Twitter following are largely in agreement that Mathieu, 32, would not be a welcome addition to Wenger’s squad, with fans believing there are better options in the market available to the Gunners.

#afc Jeremy Mathieu??? No way that guy is absolute rubbish

@OliPriceBates @Fresh_Arsenal id rather have Evans than that donkey Mathieu….

Jeremy Mathieu linked with us now ? I can’t keep up with this transfer window I might just switch off from football until the window is shut

Don’t get me wrong, I like Mathieu. But how stupid Wenger has to be to buy an aging CB with suspicious knee… While having zillions of cash

One Barcelona fan though, is desperate to see the France international leave and would even let Mathieu leave on a free which suggests Barca fans of the centre-back.

PLEASE! Come and take him for FREEEEEEE

On the other side of the scale, this Arsenal fan is desperate to see Mathieu put pen to paper over a transfer at the Emirates but may have gone too far.

I’m not releasing my grandma until you announce Mathieu @Arsenalpic.twitter.com/4lQU8Ru5lW

The 32-year-old has made 75 appearances for Barcelona after signing from Valencia for £17.2million in 2014, chipping in with three goals for the Spanish Champions.

Mathieu has two years remaining on his Barcelona deal but the club will listen to offers for him this summer after signing Samuel Umtiti, who is also a left sided centre-back, from Lyon for £21million.

In other Arsenal transfer news, the Gunners could be left exposed if they do not invest quickly.