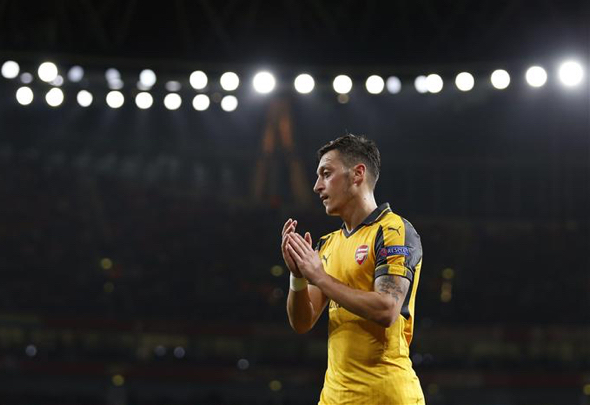 Arsenal fans are delighted for playmaker Mesut Ozil after he scored a wonderful hat-trick against Ludogorets Razgrad, the first of his professional career.

The Germany international put the Bulgarian side’s defence to the sword in the second half, as the Gunners completed an impressive 6-0 rout over their Group A rivals.

Alex Oxlade-Chamberlain, Theo Walcott and Alexis Sanchez also chipped in for the North London giants, as they go top of their group, leapfrogging Paris Saint-Germain.

Arsenal fans were ecstatic on Twitter to see the former Real Madrid playmaker score the hat-trick, with some fans shocked that it was Ozil scoring rather than laying on goals for his teammates.

My happiness will never be as much as right now, watching Ozil leave with a match ball.

Ozil was complete opposite in second half. Superb

Happiness is watching Ozil get the Match Ball! ☺️😍

The best player in the world scored a hat trick today!👏🏿👏🏿. MESUT OZIL

The former Schalke attacking midfielder has been in superb form for the Gunners this season, scoring six goals in 10 league and cup appearances for the Gunners.

Arsenal’s number 11 will be expected to start against Middlesbrough on Saturday, as Wenger’s men look to win their eight game on the bounce in all competitions. A win could see Arsenal move to the top of the Premier League table.

In other Arsenal news, fans have reacted on Twitter to Alexis Sanchez’s performance against Ludogorets.