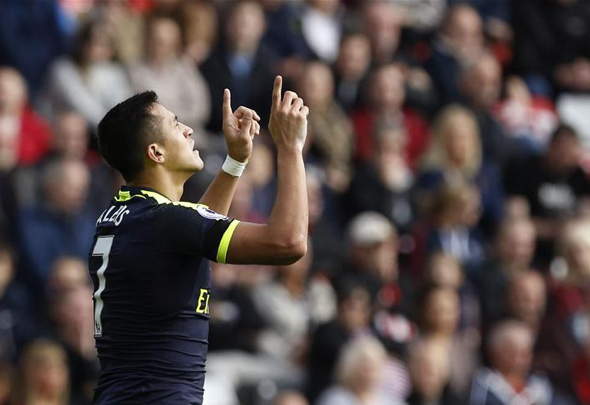 Alexis Sanchez scored his fifth (and later his sixth) Premier League goal of the season against Sunderland on Saturday afternoon.

It was a real team effort though and a trademark Arsenal goal as they started the move from a throw-in deep in their own half.

From the throw-in, from Kieran Gibbs to Laurent Koscielny, the Arsenal players built up a total of 21 additional passes, across the length of the field, before Alex Oxlade-Chamberlain picked the ball up and whipped in a cross.

Alexis Sanchez, not the tallest player on the field, rose ahead of Lamine Kone to head the ball home and send the visiting fans wild.

Opta confirmed that it was the most passes before a goal in the Premier League this season.

22 – There were 22 passes before Sanchez's goal v Sunderland, the most before a goal in the Premier League this season. Move. pic.twitter.com/u30eP4fYUU

Arsenal fans took to Twitter to celebrate the goal that helped take them go three points clear at the top of the Premier League table, with Manchester City and Liverpool due to play later on Saturday.

21 passes from cech to the header by sanchez. Great build up for the goal and good quality of football. Good first half.#ARSENAL

That Sanchez goal tho. That's why he's my favourite Arsenal player, but those defenders foolish small

📸 22 passes led to Alexis Sanchez's opener, the most in the #PL this season. Sunderland 0-1 Arsenal (31mins) #SUNARS pic.twitter.com/XIGynE2rnI

Come on Arsenal, grab a few more in the second half, Sanchez and chamberlain have been unreal 🔴⚪️🔴⚪️

In other Arsenal news, TV pundit and former striker Alan Smith has pinpointed this problem ahead of Arsenal’s title challenge this season.