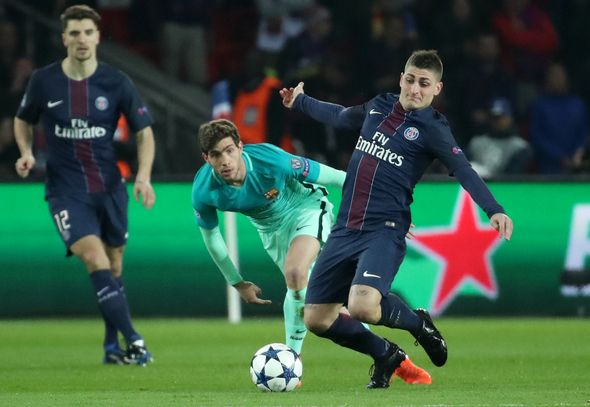 Arsenal fans have taken to Twitter to urge the club to sign Paris Saint-Germain midfielder Marco Verratti, following his scintillating display against Barcelona.

The 24-year-old played an influential role during their shock 4-0 victory over Barcelona in Tuesday’s Champions League knockout-stage encounter, and Arsenal fans were left open-mouthed.

As the Gunners prepare to take on German giants Bayern Munich on Wednesday, fans have taken to social media to urge the club to buy Verratti in the summer.

Many believe that the Italy international will be the missing piece to their midfield puzzle, and would be a significant upgrade on the likes of Jack Wilshere and Aaron Ramsey, as well as the ideal replacement for the ageing Santi Cazorla.

Can we sign Verratti or Rabiot this summer please? #afc

Yep, haha. And I'm a massive fan of Verratti and Matuidi aswell. Would love any of them at Arsenal.

Want to spend 89 million on someone? Verratti is your man.

If there's one player I could sign for Arsenal it might well be Verratti. Perfect man to succeed Cazorla. #PSGFCB #UCL #ChampionsLeague #AFC

In a hypothetical world, Verratti is the only viable successor to play Cazorla's role effectively; very similar in every aspect.

Verratti should be playing for Arsenal.
I love the player he is.

Verratti would be such an amazing replacement for Santi after his time at Arsenal.

Verratti has contributed two goals and five assists for PSG in all competitions this season, his fifth campaign in the French capital.

He joined the club back in 2012 in a reported £10million deal from Italian side Pescara, and has made a total of 186 appearances for the club.

The PSG star is already reportedly on the radar of one of the Premier League’s top clubs, with the Daily Mail claiming in December that the midfield ace was a top January transfer target for Chelsea boss Antonio Conte.

In other Arsenal transfer news, here are three signs that suggest Arsenal have already parted ways with this senior man.