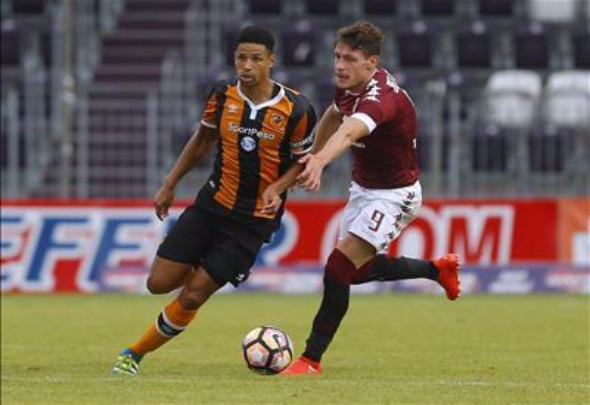 Torino have rejected a £56million bid for Andrea Belotti, according to the club’s sporting director Gianluca Petrachi.

The Italian director told Sky Sports the club have not accepted a huge bid from the Gunners for their star striker.

Petrachi went on to claim Belotti is “worth more” than the fee Arsenal offered and he revealed a huge buy-out clause was included in the player’s contract in an attempt to prevent him from leaving.

The report went on to state that Arsenal have told Sky Sports’ sources they have not made a bid for the striker despite the director’s claims.

“We received and refused a €65m (£56m) offer from Arsenal for Andrea Belotti, but it does not reflect the value of the player. Anyway, he is going nowhere for now. We want to enjoy him, then we’ll see what happens,” Petrachi told Sky Sports.

“We intend to keep Belotti and president Urbano Cairo signed this important buy-out clause. I think he’s worth more than they have offered.”

Belotti has been in sensational form for the Italian giants so far this season and he has already netted 14 goals in 19 appearances for his club.

In 2016, the striker excelled in the number nine role and he netted 21 goals in 32 club appearances, as well as providing six assists.

He has been equally as impressive for Italy too and Belotti has netted three goals in his five international appearances, as well as picking up an assist.

The 23-year-old is considered one of the most exciting forwards in Europe and he has previously been linked with a number of Premier League clubs including Liverpool and Manchester United.

Belotti is a prolific goalscorer and that’s exactly what the club needs – especially if Alexis Sanchez is going to be on the move in the summer. Wenger will be frustrated that the offer has been made public, although the club, for now, is officially denying the news. It’s unlikely that Torino have just made it up though, and it shows that Wenger is willing to spend big if the right player comes along. Arsenal fans might be more concerned about what this means for Sanchez though, with contract talks still ongoing and no immediate resolution expected. A new £56million striker with Belotti’s record would be a good way to dampen the disappointment though if the Chilean has decided to move on from the Emirates.

In other Arsenal news, this is the Gunners’ star Everton should target in the summer.