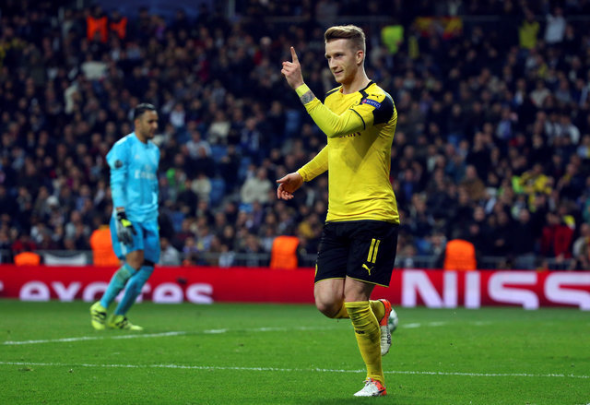 The Telegraph claim that Reus is being kept as an option for the Gunners with Ozil and Sanchez’ north London future in doubt.

Both players contracts are set to run out in 2018 and it is likely that Arsenal will sell them in the summer if they don’t agree new deals to avoid letting them leave on a fee.

This has led to Arsene Wenger seeking new options and attacking superstar Reus is one of them.

However, the report does state that Arsenal’s priority is still to try and persuade Sanchez and Ozil to stay at the club.

It is stated that offers of around £180,000-a-week have been made although both players, but with wages increasing by the year in the Premier League it may take an offer in excess of £200,000 to secure them.

Reus, 27, would be a huge signing for Arsenal given his reputation across the world.

The 29-time capped Germany international has been a star of the successful Borussia Dortmund team for a number of years now and has scored 80 goals, while providing 59 in 171 fixtures from his wing position.

He has played just six matches in this campaign due to injury, but has still returned with six assists and four goals.

It is assumed that where he is still contracted until 2019 it would take a very large offer to bring Reus to the Emirates.

Reus would be a huge step in the right direction for Arsenal as they look to end their 12-year wait for a Premier League title. However, they should not wait for Sanchez or Ozil to leave before signing him. Given that the Chile international now plays as the front man with Ozil in behind them, Reus would make up a devastatingly strong front trio on the left. Many supporters have questioned the Gunners ambition in the past, but the signing of Reus would surely show Arsenal are ready to challenge for the league and Europe once again.

In other Arsenal transfer news, Premier League clubs are plotting a January raid for this Gunners attacker.