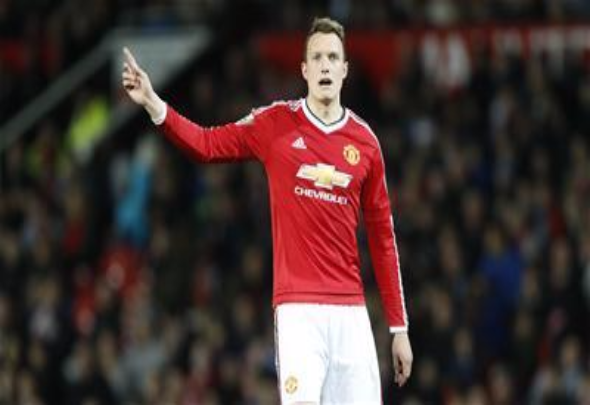 Arsenal are monitoring Manchester United defender Phil Jones as they attempt to fill their defender void, according to a report.

The Guardian claims that the 24-year-old centre-back’s situation at Old Trafford is being watched by the Gunners.

However, it is believed that the England international is content to stay at United and that manager Jose Mourinho has no desire to see him leave.

Stoke are also interested in Jones, but Arsene Wenger is keen to sign a centre-back this summer and West Brom’s Jonny Evans and Valencia’s Shkodran Mustafi have been heavily linked with a move a move to the Emirates.

Arsenal will be without Per Mertesacker and Gabriel for the opening months of the season due to injury and have been forced to use rookie summer signing Rob Holding at centre-back in their first two Premier League encounters of the campaign.

It is understood that United’s determination to keep Jones has prompted Wenger to turn to their former player.

The injury was suffered amid claims from the Daily Mail that Tony Pulis has slapped a £25million price tag on the defender’s head, after joining for just £6million the year before.

However, Stoke are remaining hopeful they can get a deal done for Jones, but there isn’t any indication on how much the defender who cost United £16.5million in 2011 would be worth.

The 20-time capped international still has three-years left on his contract at Old Trafford, but after an injury plagued campaign last season, the versatile defender featured in just 13 encounters.

In other Arsenal transfer news, Kelechi Nwakali could be sent on loan by the Gunners.