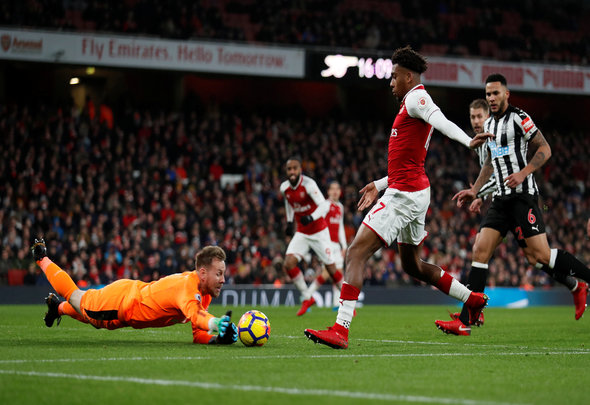 Arsenal manager Arsene Wenger needs to cut Alex Iwobi from the Gunners starting XI for good if his side is going to stand any chance of lifting the Europa League trophy.

Iwobi has flattered to deceive on every level but has become a regular for the North Londoners and Eddie Nketiah can provide all that the 21-year-old doesn’t.

It’s not clear what the Frenchman sees in the Nigerian born forward.

It definitely isn’t for his goals per game ratio – as it stands Iwobi has just two goals in 30 outings in all competitions.

His passing ability and work rate also leave something to be desired and a club the size of Arsenal really should be able to call upon better quality than he can offer.

And in Eddie Nketiah they have a ready-made replacement.

The 18-year-old is a star of the Gunners youth system but the Emirates crowd have only been given glimpses of what the youngster can do.

His pace, drive, and ability to finish need to be unleashed on CSKA Moscow when the Russian side arrives at the Emirates in early April for the first-leg of the quarter-final of the Europa League.

Nketiah wants to put his imprint on the game and exudes a confidence in front of goal you’d normally expect from a player far senior to the youngster.

After another season of mediocrity, a Europa League medal would be a welcome comfort to those frustrated Arsenal fans, but that won’t be realised with Iwobi spoiling the show.

In other Arsenal news, ‘We are into the final’, ‘Winning this’ – Gunners fans erupt on Twitter after Europa League draw.