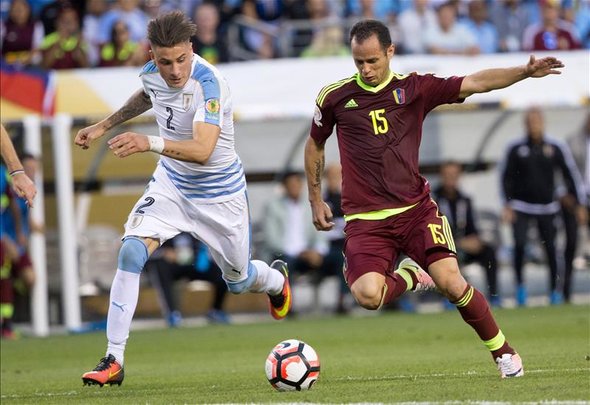 Arsenal are not in talks for Atletico Madrid defender Jose Gimenez and the club don’t want to sell, according to a report.

The Daily Mail claimed yesterday that the Gunners have made a move for the £40million-rated defender in the wake of their recent crisis at the back.

But Spanish newspaper Mundo Deportivo have stated that Arsene Wenger’s side are not in negotiations for the centre-half and that Atletico are not entertaining offers for their star youngster.

The Mail report says that the centre-back, 21, has a £56million release clause in his contract, although Arsenal were believed to be unwilling to pay such a high fee.

The Uruguay international has emerged as the latest defensive target for Wenger as he aims to bolster his side’s defensive ranks following a spate of pre-season injuries that have left him without Per Mertesacker and Gabriel for the opening months of the season.

Gimenez, who has key Champions League experience, featured in 37 games in all competitions last season for his side.

The starlet has already played 84 matches in his short career, scoring three goals and providing four assists in the process.

The former Danubio FC ace has two years remaining on his current deal and was thought to be tempted by a move to the Premier League.

Arsenal have been in the hunt for a new defender this summer and have been heavily linked with Shkodran Mustafi after Sky Sports revealed he had agreed personal terms with the north London outfit.

Sky Sports’ Spanish expert Guillem Balague has previously claimed that the Gunners were poised to sign Mustafi from Valencia for a fee of £25.9million, but no deal has been agreed between the sides.

Mustafi: VFC happy 2 sell for around €30m as they down €10m with FFP. But would rather sell others. AFC want him. Not sure he's good enuf

Fans of the club will now be hoping to secure a new defensive option before the end of the transfer window.