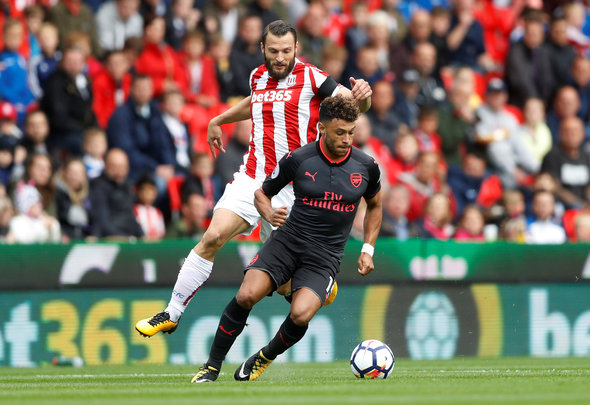 Arsenal have offered midfielder Alex Oxlade-Chamberlain a huge new wage package worth £180,000-a-week to tempt him into signing a new contract with the club, according to a recent report.

The Telegraph has revealed that Arsene Wenger met with the 24-year-old on Thursday to discuss a contract extension and offered to double his wages if he stayed.

The newspaper claims that the Gunners have offered him the money as they are fearful that the England international won’t sign a new contract as Premier League rivals Chelsea have launched a £35 million bid for the versatile player.

It is said that the Ox has been told that he has a level of responsibility to the club after growing through the rankings since joining as a teenager back in 2011.

His newly offered wages would leave him only sat behind new singing Alexandre Lacazette in the club’s wage structure, which is surprising considering he has found it difficult to secure a regular starting spot in the squad.

Last season, the Englishman found himself being moved round on the pitch and played in eight different positions including all areas of midfield, both wings as well as at right-back.

Arsene Wenger is appearing more and more desperate to hold on to his versatile midfielder. Not only is he trying to prevent a move to Chelsea with a huge new wage fee, but he has also been starting him for every competitive match of the season so far, which is something the Ox struggled to secure over the past few seasons. It seems as though Wenger is worried about losing a number of his players and it looks like he his almost panicked as deadline day looms. While £35 million from Chelsea would help recoup the fund he spent on Alexandre Lacazette earlier in the summer, Oxlade-Chamberlain has proved himself to be a valuable asset on the pitch this season and his departure would be a great loss.