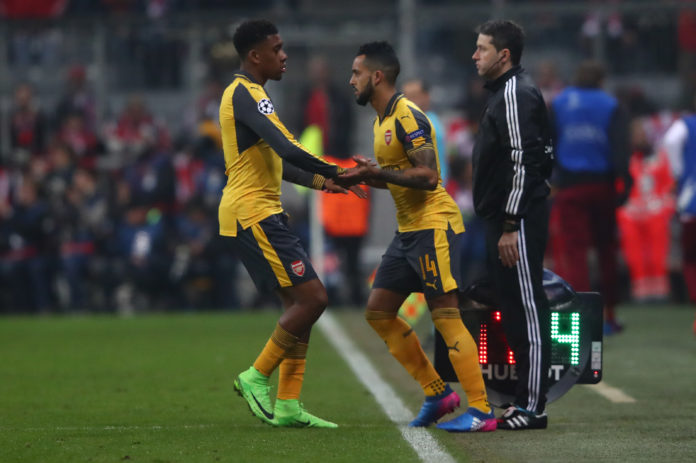 Football Insider rates the Arsenal players after their 5-1 defeat against Bayern Munich in the Champions League on Wednesday night.

David Ospina 6 – The goalkeeper can’t be blamed for several of the goals as the defence were torn apart, but will be disappointed to concede five. People will question why Petr Cech was axed, but he made a number of top-class saves to his credit.

Shkodran Mustafi 4 – He looked assured alongside Koscielny, but fell to pieces when Gabriel came on.

Laurent Koscielny 7 – Arsenal’s best defender in the first-half and managed to deal well with Robert Lewandowski. He also was fouled for the penalty, which led to Alexis Sanchez’s goal. However, a hamstring injury forced him off in the second period.

Kieran Gibbs 4 – He was terrorised by Robben on the wing, who was in fantastic form. Philipp Lahm also got forward well and Gibbs struggled defensively.

Francis Coquelin 4 – The midfielder failed to pressure Robben for his opening goal and wasn’t strong enough in his tackles.

Granit Xhaka 5 – He came into the side after his suspension and was unable to provide the defensive cover.

Alex Iwobi 3 – The youngster couldn’t get into the game and offered little cover for Kieran Gibbs, should be dropped from the starting line-up.

Mesut Ozil 5 – He showed the defensive side of his game with some important tackles in the middle of the park. Couldn’t influence the game, though.

Alex Oxlade-Chamberlain 4 – He was moved into a wide position instead of centrally and was unable to threaten offensively with his pace. Gave the ball away needlessly as they conceded a fifth goal.

Alexis Sanchez 6 – Worked tirelessly off the ball and was isolated for the majority. Did manage to score an away goal after reacting quickest to his missed penalty to net an equaliser.

In other Arsenal news, a Sky Sports pundit believes this player must leave the club.