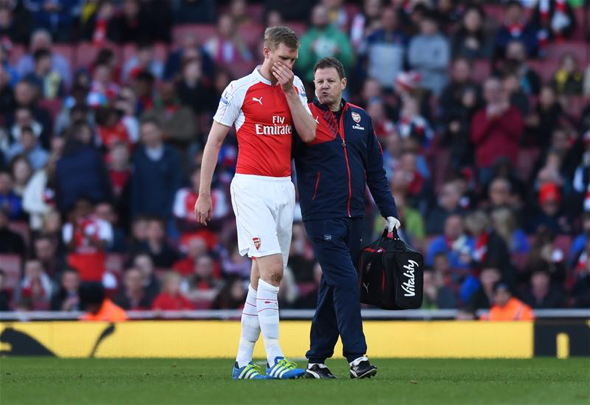 Arsenal’s senior centre-back Per Mertesacker has dismissed rumours linking him with a move away from the Emirates, and has said a contract extension is an “absolute priority”.

Mertesacker has been a force at the heart of the Arsenal defence since his move from Werder Bremen in the summer of 2011, but his contract runs out next summer and rumours started circulating that he might be heading for a return to the German club.

A report in Bild linked the 6ft 6in defender with Bremen, when their sporting director Frank Baumann said re-signing Mertesacker would be a good move for the club.

Baumann claimed that his former teammate would do well if he decides to return for a second spell with the Bundesliga side.

“I could well imagine Per at Werder,” Baumann said.

However, Mertesacker has dismissed these rumours and in an interview with Spox, he has committed to fighting for a contract extension at Arsenal.

“An extension at Arsenal has absolute priority for me,” said Mertesacker, before admitting that he didn’t know when talks with the club would begin.

Asked about the Werder Bremen speculation, Mertesacker was emphatic in his response. “As I said: For me, Arsenal is a top priority. Everything else is pure speculation and I will not participate.”

Mertesacker suffered a knee injury in a pre-season friendly with Lens in July and hasn’t featured in this season’s Premier League.

New signing Shkodran Mustafi and Laurent Koscielny have formed a solid partnership at the heart of the Gunners defence, after Rob Holding also impressed in the first three games of the season.

Mertesacker isn’t due back until early next year and he will be free to talk to overseas clubs about a potential move in January.

In other Arsenal transfer news, Rio Ferdinand has given this verdict on the Arsenal defence.