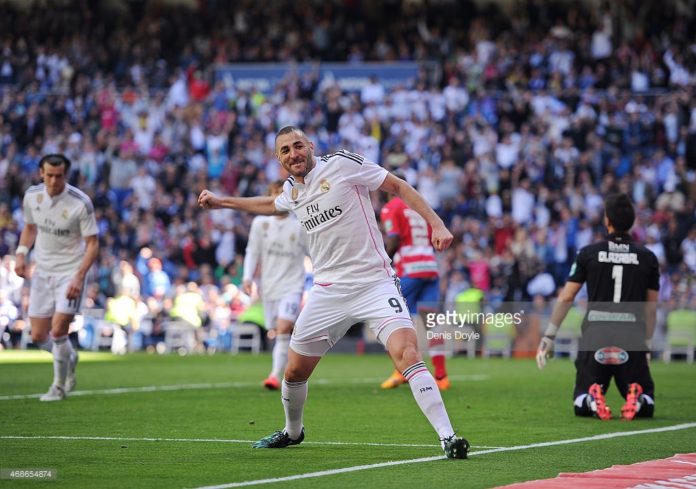 EXCLUSIVE | By Arsenal correspondent Tony Hughes
Arsenal will make a fresh attempt to sign Karim Benzema by holding new talks with the player’s camp next week, Football Insider sources understand.
Arsene Wenger has been given the green light by the Gunners’ board to make a club-record £45million offer for the Real Madrid star if they can convince him to make a sensational switch to Emirates Stadium.

The Gunners have already made a lucrative contract offer to the Real Madrid star after holding discussions with Benzema’s entourage in a bid to entice him to north London.
Arsenal have not yet tabled a formal bid for the player but new Benzema talks are expected next week as Arsene Wenger prepares to persuade his fellow Frenchman that joining Arsenal would represent the right career move.
Real are prepared to listen to offers of above £40million for the France international as long as they can secure a replacement.
Football Insider understands that the Arsenal are willing to break their transfer record, which currently stands at the £40million paid to prise Mesut Ozil, also from Real, two years ago.
Privately, Benzema harbours doubts as to whether the Gunners can match his ambitions of competing for the major honours even though they have won consecutive FA Cups and are regarded as a team on the up.
The Frenchman has been used to competing for the Champions League and La Liga titles every season, and has expressed concerns to friends as to whether Arsenal can reach the same level.
Wenger’s team are running out of time to make what would be one of the headline Premier League deals of the summer but there remains hope from inside the club that it can still happen.

Benzema, 27, is the first-choice centre-forward at the Bernabeu and will only be allowed to leave if a proven alternative is signed.
As revealed by Football Insider,  Arsenal have identified Benzema as the type of “exceptional player” that Wenger has said he is looking for. Speaking on Friday, the manager admitted he is still in the market but claimed it is difficult to buy leading players at this stage of the window.
There is a possibility that Olivier Giroud could leave Arsenal if the Londoners could pull off what would be one of the summer’s most sensational deals.
Benzema has scored 134 goals in 281 matches for Real since joining the club from Lyon in 2009. He has been a regular starter in the spearhead role since Gonzalo Higuain joined Napoli two years ago, forming a productive alliance in a front three with Cristiano Ronaldo and Gareth Bale.
He has attracted strong interest from Premier League clubs, with Manchester United manager Louis van Gaal among those who is also closely monitoring him.