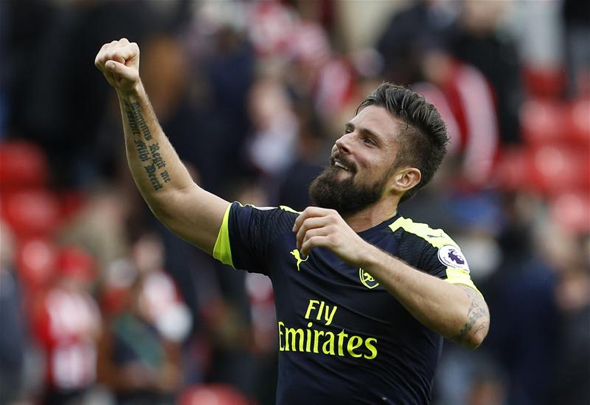 Olivier Giroud was given a place in Arsenal’s starting XI against Ludogorets on Tuesday and Wenger said that he wanted to keep the striker’s confidence up and make use of his aerial ability.

Arsenal might have won the reverse fixture 6-0 at the Emirates but Wenger doesn’t think it will be an easy game in Bulgaria.

Talking to BT Sport ahead of kick-off, Wenger was asked why he had selected such a strong team.

“We have a squad that’s a very even level, I’ve only got good players,” Wenger said.

“We have an opportunity we want to take. They will have a desire for revenge and be up for it. A lot of the way tonight goes depends on how we start.”

Asked why he decided to give Giroud a start Wenger said, “I believe it’s a good opportunity. Olivier scored two goals and when they’re on a run you want them to keep going.

“Tonight maybe we need some challenge in the air and to play some longer balls, and Giroud will help there. It will also be good for his confidence.”

Arsenal fans expecting a similar scoreline to the 6-0 at the Emirates might have to be more realistic, as Wenger wasn’t convinced the humiliating scoreline was reflective of the action.

In other Arsenal news, Rio Ferdinand has given this positive assessment of the Arsenal defence.