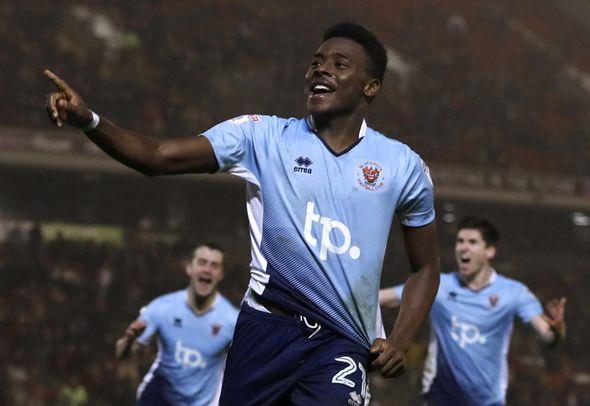 Aston Villa have joined a host of Premier League clubs in the race to sign Blackpool youngster Bright Osayi-Samuel in the summer, according to a report.

The Sun on Sunday (5 February, page 63) claim that Aston Villa and Everton have now entered the race to sign the highly-rated youngster after the Express reported Premier League big guns Arsenal and Tottenham were in the race for his signature.

The 19-year-old has taken League Two by storm this season, establishing himself as an indispensable member of the first-team squad at Blackpool.

However, the winger is out of contract at the end of the season, and the Seasiders’ ongoing financial woes may prevent them from offering him an improved deal.

Blackpool boss Gary Bowyer has previously resigned to being powerless to resist the temptation of Osayi-Samuel quitting the club in the summer, given the monumental divide in stature between the club and his potential suitors.

Since making his first-team debut for the club in 2015, the Nigerian-born star has made 59 appearances in all competitions, contributing two goals and three assists, impressive a number of club scouts.

Back in August, the Express claimed that Arsenal and Tottenham had both sent scouts down to the Hive to watch Osayi-Samuel in action against Barnet. He played the full 90 minutes in a 1-1 draw.

Aston Villa have already succeeded in the capture of another lower-league talent, acquiring Jacob Bedeau from Bury in a £900,000-plus-add-ons deal last month.

Considering how much money has been spent by Aston Villa both in the summer and in January, in ensuring they make an immediate return to the Premier League, there has been little to show for it. It might be wise, therefore, for Villa to consider their current problems, before throwing yet another transfer story down the throats of a frustrated fan-base. Club chairman Tony Xia has recently spoken about the long-term vision for the club, and while Osayi-Samuel would be very much a long-term addition, the focus should be elsewhere. He looks a decent talent, but ultimately, if Villa can’t re-establish themselves among England’s elite, the race for his signature will most likely be won by a Premier League side.

In other Aston Villa transfer news, the club have managed to secure the long-term future of this prized youngster, after a protracted contract saga.