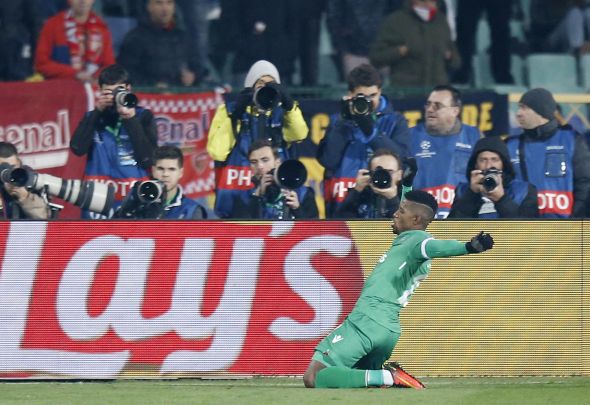 Aston Villa are plotting a move for Ludogorets star Jonathan Cafu in January as they eye a replacement for Albert Adomah, according to a report.

Winger Adomah is likely to represent Ghana at the African Cup of Nations after starring in their qualification phase, and manager Steve Bruce could look to bring in a replacement in January.

Bulgarian news outlet Sportal claim that Cafu is high on Bruce’s January shopping list, after impressing against the likes of Arsenal, Paris Saint-Germain and FC Basel in Group A of the Champions League.

The 25-year-old has been in fine form from the right of Ludogorets’ front three, scoring eight goals in 14 league and cup games this season, including strikes against the Gunners and Basel.

With just over 18 months left on his contract, the Bulgarian giants could be tempted to cash in on their Brazilian star now instead of seeing him leave on a free transfer in the summer of 2018

Cafu is only in his second season in Bulgaria, after moving for a club-record £1.9million fee to Ludogorets from Brazilian giants Sao Paulo in July 2015.

The prolific star has scored 18 goals and provided a further nine in assists for the Champions League side since his move, who currently sit three points clear at the top of the Bulgarian First Division.

Ludogorets ace Cafu has proven that he has the quality to score against some of the best defenders in the world, and would therefore be a major coup if Villa could grab his signature. The Midlands outfit lack width in their squad, which has seen centre-forward and top goalscorer Jonathan Kodjia move to the left flank on occasions. The likes of Jack Grealish, Ross McCormack and Leandro Bacuna can play out wide, but are better off being used centrally, where they appear to be far more at ease. A move for Cafu would solve that problem area, as Adomah leaves to take part in the Africa Cup of Nations until the beginning of February.

In other Aston Villa transfer news, this Premier League club are eyeing a swap deal that would involve Rudy Gestede leaving Villa Park.