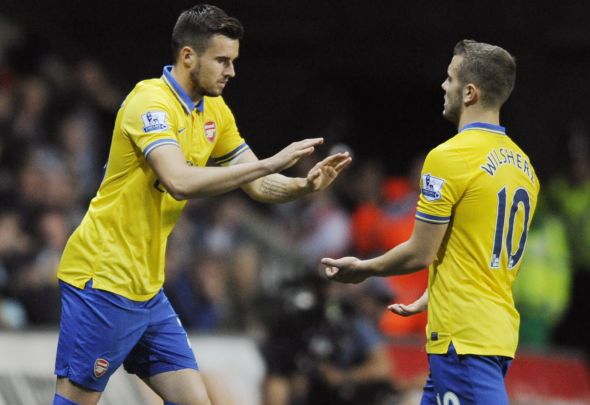 Aston Villa are hoping to sign Arsenal defender Carl Jenkinson on loan in January, according to a report.

The Birmingham Mail claim manager Steve Bruce wants the 24-year-old right-back to join the Midlands side in their promotion push next month.

Jenkinson, who spent two seasons on loan with West Ham, made his first appearance for the Gunners after 898 days during their 2-0 win against Reading in the EFL Cup in November.

The former Charlton player was returning from a serious knee injury he suffered in January while playing for the Hammers.

He has since played five Premier League, Champions League and League Cup games for Arsene Wenger’s side, starting all of those matches.

It said promotion expert Bruce is keen on bringing the one-cap England international to Villa Park on a temporary basis.

Jenkinson has fallen down the pecking order at the Emirates with the fast improving and highly-rated Hector Bellerin the first choice right-back.

Villa have been playing Alan Hutton in the full-back position this season, with summer signing Ritchie De Laet injured for the rest of the campaign and Micah Richards not selected for action.

Jenkinson would be a great fit for Aston Villa in their push for promotion this term. His experience and ability would add great solidity to the backline and ensure manager Steve Bruce has depth within his squad. Hutton has been in great form for the Championship side in recent weeks, but much-needed competition in defence would help their cause for the second half of the campaign. Not only that it would allow Jenkinson to get regular game time, following his serious knee injury, as Bellerin, who recently returned from injury, is first choice for Gunners manager Arsene Wenger.

In other Aston Villa transfer news, the Championship club are scrapping the Premier League big boys to sign this £13 million rated midfielder.