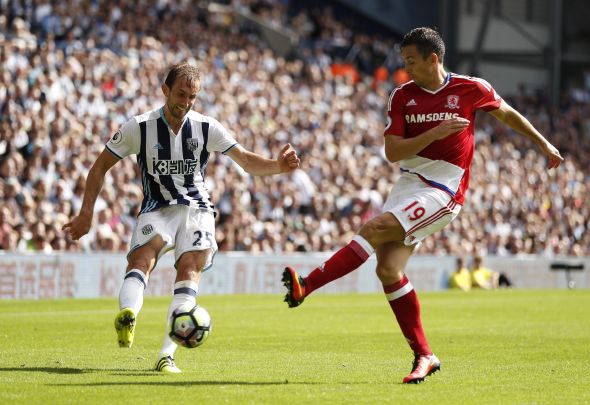 Aston Villa are considering a bid for Middlesbrough midfielder Stewart Downing, according to a report.

The Express and Star claim that the Midlands giants are weighing up a move for the 32-year-old this summer.

It is understood that Boro have told the winger he is surplus to requirement at the Riverside Stadium next season and their manager Garry Monk has made him available to leave.

Downing was unable to help Boro suffer relegation from the Premier League in the last campaign and that subsequently saw Aitor Karanka lose his position as manager.

The left winger made 34 appearances across all competitions, scoring two goals and supplying three assists in return.

He previously spent two years at Villa Park between 2009-11 and made 79 appearances for them.

Steve Bruce is looking to bolster his squad ahead of next season where he will hoping to guide Villa towards a promotion campaign, despite finishing 13th last year.

Villa have a distinct lack of options in the wide area going into next season and it’s a position that needs strengthening by Bruce. Downing is a player that can divide opinion among fans following his £20million switch to Liverpool in 2011. However, he would be a good boost to the squad if he rejoined this summer and push them a step closer to a promotion push. Downing has been a top-flight player during most of his career and in theory would be able to be more creative in the Championship. His set-piece delivery and crosses would give an extra dimension to the Villa attack, while his intelligence and experience would be a massive boost.

In other Aston Villa transfer news, they are weighing up a move for an international defender.