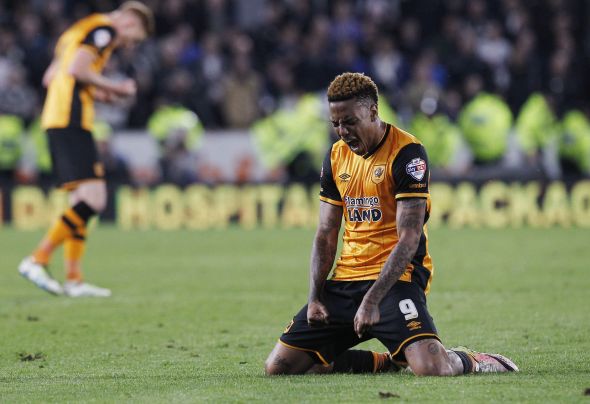 Aston Villa have tabled a bid worth £17million for Abel Hernandez, according to a report.

The Daily Mail claim Villa have put together a package of £14million plus £3million of add-ons to tempt Hull into selling the striker.

The Championship club have been given hope of pushing through the deal as Hull have lined up Bristol City star Jonathan Kodjia to replace Hernandez.

The Telegraph claim that the Premier League outfit are set to make Ivory Coast international Kodija their club-record signing in a deal worth £14million.

Villa’s offer for Hernandez would smash the Championship record fee for a player, which already belongs to Villa when they signed Ross McCormack for £12million last month.

Villa’s bid comes after the 26-year-old declared that he wouldn’t hesitate over a move to the Midlands club, even though a move would see the former Palermo striker drop a division.

The forward was Hull’s top goalscorer last term, with his 22 strikes in 45 matches in all competitions crucial to the club earning promotion via the play-offs.

Hernandez joined Hull from Italian side Palermo in 2014 for a club-record fee of £10million, but the Uruguayan subsequently struggled in Premier League as they were relegated into the second-tier in the 2014-15 season.

Hernandez has started all three of the Tigers’ league matches this season as caretaker manager Mike Phelan has steered the team to an against-the-odds series of results.

The Uruguay international has global pedigree as he scored for his country at this summer’s Copa America and has scored 11 goals in 27 matches for his country.

Villa have openly spoken about adding a striker to their ranks after relegation last term which saw them find the net on only 27 occasions.

Roberto Di Matteo’s side recently purchased striker McCormack from Championship rivals Fulham, but Villa owner Tony Xia has hinted in recent weeks that there will be more signings at Villa Park, via his Twitter account.

In other Aston Villa transfer news, this defender is set to leave Villa Park as clubs circle.