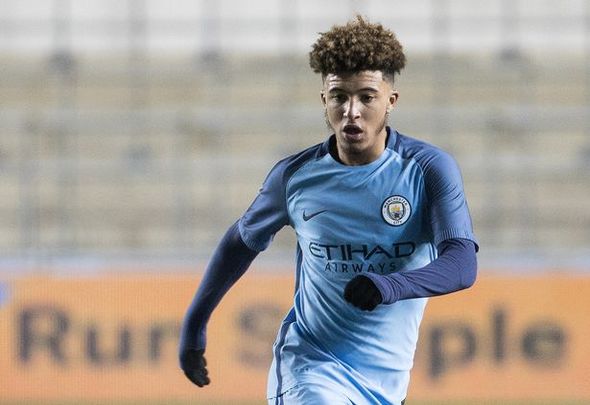 Tottenham-targeted teenager Jadon Sancho has withdrawn from training at Manchester City and has returned to London with no intention of returning to his club, according to a report.

The Independent claim the attacking midfielder, 17, has made up his mind to quit the Premier League giants even though he has one year remaining on his scholarship deal.

It is said that Arsenal and Tottenham are locked in an all-north London battle to sign Sancho, who is likely to cost a compensation fee of around £4million.

The Independent report that Spurs have already tabled an offer for the teenager after asking for him to be included as a makeweight in the deal that took Kyle Walker to City in a £50million deal last month.

The Manchester club rejected that offer and have tried to demonstrate their faith in Sancho by offering him a three-year professional contract worth £30,000-a-week.

The player has made it clear he wants to sever his ties with City and secure a move to a London club.

Arsenal were once the go-to club for outstanding and ambitious youngsters who were not getting enough game time at their clubs, usually ones of greater resources with too many hurdles blocking a first-team path. But, like peak Arsene Wenger, Mauricio Pochettino has a burgeoning reputation as a manager who develops stars rather than buys him. His coaching work is highly rated by all those who come under his wing, while his man management also wins favour with complex modern players who are millionaires before they finish their teens. This north-London race could tell us a lot about the respective positions of the two clubs.

In other Tottenham transfer news, a Spurs player has jetted out on a private plane to hold transfer talks on a deal that is set to be completed in the coming hours.