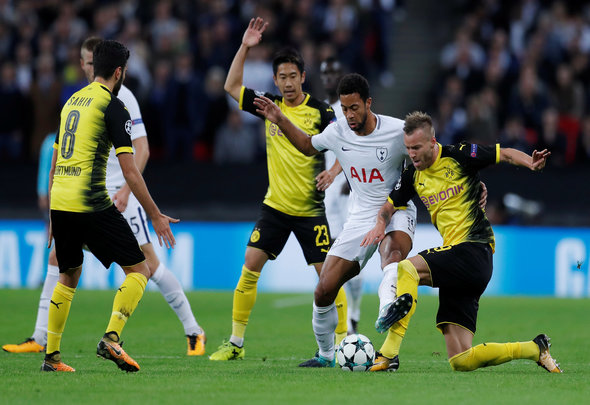 Moussa Dembele completed 90 minutes in Tottenham’s win over Borussia Dortmund – and the club’s supporters were critical of the midfielder on Twitter.

Spurs managed to begin their Champions League group with a 3-1 home victory over the Bundesliga side.

Heung-Min Son opened the scoring in just the fourth minute at Wembley, before a threatening Dortmund side equalised through a brilliant curling finish from Andriy Yarmolenko.

Harry Kane then secured the three points with a goal in either half, but Jan Vertonghen was sent off in the closing moments of the game for a second yellow card.

Spurs fans will have been delighted with a great start to their European campaign, but were critical of Dembele’s performance.

The 30-year-old is usually a powerhouse figure in the centre of the park and found himself struggling in the first-half to close down Dortmund’s midfielders .

Dembele is looking knackered, should bring Sissoko on

We need better possession dembele off the pace chasing shadows 2 crackers if we can change to get of the ball we've got this ! #coys

sissoko on for dembele please! never thought i'd ever say that. #thfc

Mauricio Pochettino is currently without midfield mainstay Victor Wanyama through injury, meaning he used the combination of Dembele and Eric Dier against Dortmund.

Moussa Sissoko is also in contention for a starting position in midfield and the manager could have a selection headache ahead of a clash with Swansea on Saturday.

Dembele has become a favourite during his time with Spurs and is a regular feature in midfield.

However, supporters feel he had an off night against Dortmund as he made his 202nd appearance for the North London club.

The Belgium international is usually a big fan favourite for his dominating performances and will hope to rediscover his top form next time he plays.

In other Tottenham news, Gary Neville has made an odd claim about Kane after the Dortmund win.