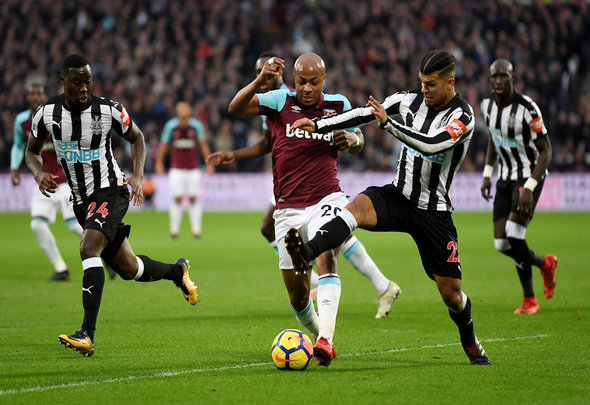 EXCLUSIVE By Pete O’Rourke
West Ham United forward Andre Ayew is poised to rejoin Swansea City for a fee of £16million, Football Insider sources understand.
The two clubs have been locked in talks for the last couple of weeks over a move and a well-placed source has told Football Insider that the Hammers are ready to accept their Premier League rivals’ £16million bid for the Ghana international.
West Ham boss David Moyes is happy to sell Ayew, 28, despite already selling Diafra Sakho and being without Andy Carroll for several months because of injury.
Swansea have been searching for striking reinforcements throughout this month’s transfer window with the club the lowest scorers in the Premier League with just 15 goals from their 24 Premier League games.
Ayew joined Swansea from Marseille back in the summer of 2015, and impressed at the Liberty Stadium scoring 12 goals in 34 games.
His form at Swansea saw him join West Ham in a £20million deal the following summer, but he has struggled to make the desired impact at the London Stadium.
Ayew only scored six goals in his debut season for the Hammers and he has been in and out of the side this term making just nine Premier League starts with most of his appearances coming in the cup competitions.
The move back to Swansea will see Ayew link up with his younger brother Jordan as they look to guide Swansea to Premier League survival.
We’ve launched a << BREAKING NEWS FEED>> exclusively for your club. ‘Like Us’ on Facebook by clicking here if you want 24/7 updates on all West Ham breaking news