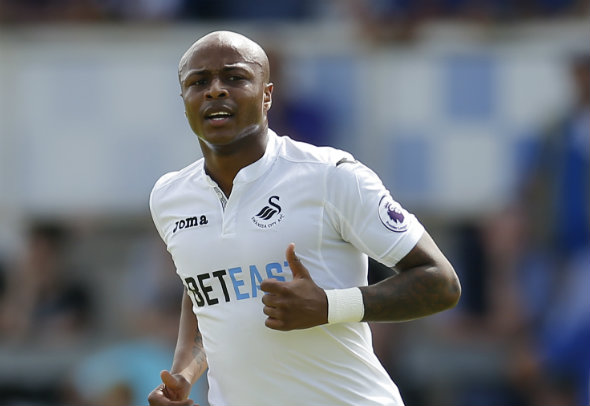 West Ham were in talks with Andre Ayew on Saturday night about a four-year contract, according to a report.

The Sunday Mirror claim the wide forward is close to finalising a £20million transfer to the Olympic Stadium.

It is said that Ayew is in discussions with the Londoners about personal terms as he puts the finishing touches to the transfer.

This comes after Sky Sports reported on their transfer centre blog earlier on Saturday that a £20million deal has been settled for Ayew to move to West Ham.

The 26-year-old will have a medical this weekend but Swansea will not formally allow Ayew to link up with the Hammers until they sign another striker.

The Welsh club signed World Cup winner Fernando Llorente from Sevilla on Friday but are still on the look-out for another front man.

The capture of the Ghana international will be regarded as a landmark deal for West Ham as it will smash their transfer record, which stands as the £15.5million signing of Andy Carroll from Liverpool in 2013.

The Swansea hitman scored 12 goals in his debut season in the Premier League and has attracted the attentions of the Hammers during their extensive search for a top class striker.

Ayew, who plays predominantly on the left wing, was thought to be interested in West Ham last summer before eventually joining Swansea on a free transfer.

The forward has three years remaining on the four-year deal that he signed when he arrived at the Liberty Stadium.

West Ham have been very public in their pursuit of a top drawer frontman this summer and have reportedly failed in bids to bring the likes of AC Milan’s Carlos Bacca, Lyon’s Alexandre Lacazette and Michy Batshuayi to the club.

In other West Ham transfer news, their negotiations over a new defender have collapsed.