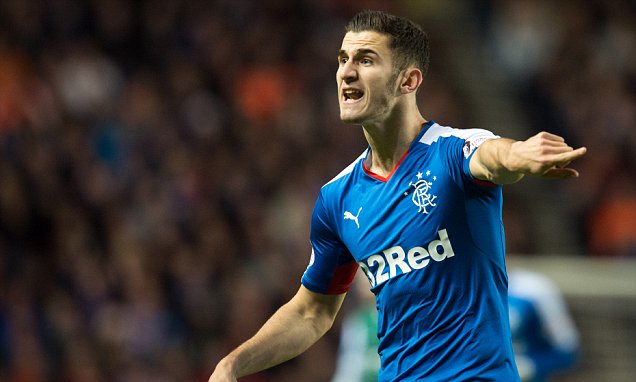 Dominic Ball has revealed that he is ready to fight for a place in the Tottenham team next season.

The highly-rated Spurs 20-year-old has spent the entire campaign on loan at Ibrox to gain crucial first-team experience.

Ball has followed the trail blazed by Spurs mainstay Eric Dier by moving forward from his more recognised central defensive role into a midfield anchorman position.

It is a switch that has paid dividends for Rangers as the centre-back-turned-defensive midfielder has played a significant part in Rangers’ Scottish Championship title triumph and progress to the Scottish Cup final.

At the same time, his parent club have had an outstanding season in which they have narrowly missed out on the Premier League title.

Ball is now set to return to White Hart Lane and, while he recognises it will be difficult to break into the London club’s matchday squad, the youngster is hopeful his performances at Rangers will propel him into Mauricio Pochettino’s thoughts.

“I think I’ve improved massively – not just as a player, but as a person too. I’ve matured loads and the experience I have gained here I will have for the rest of my life,” Ball told the Rangers website.

“I can see it only benefitting me on my journey going forward wherever that may be.

“At Spurs, you see them in games and the intensity that they play at – and you can tell it’s definitely stepped up from last year.

“I haven’t been in and around it for a year and a half, but I think the experience I’ve had at Cambridge and here has helped me massively. Going back in I am hoping to be in and around it if the manager thinks I’m good enough and I deserve my place.”

England Under-20 international Ball, who joined the Spurs academy in 2011, had previously hinted that his development would be best served by another campaign on loan at Rangers.

“I love the lads here, and the manager, and I’d definitely be open to coming back here,” said Ball, as quoted by the Rangers website last month. “But it’s down to Spurs and the manager there. I’ll have to see what the options are and what the manager at Spurs wants. I’m contracted with them and I keep in touch with them every couple of weeks.

“But I haven’t been there so I don’t know the standard. We’re talking about three or four world-class players playing at centre-back and holding-mid. I’m probably not ready to go in there, but I’ll push. I believe in myself to see what happens.”

In other Tottenham news, Thierry Henry has predicted some big-name signings will be lured to White Hart Lane in forthcoming transfer windows.