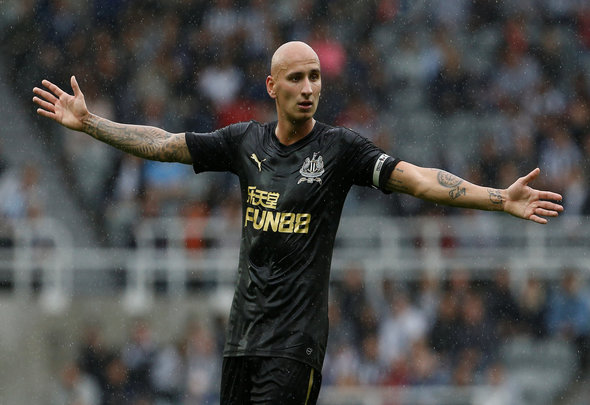 Newcastle United boss Rafael Benitez has hinted that Jonjo Shelvey still has a way to go before finding himself reinstated to the starting XI.

The English midfielder has been absent from the starting line up since the opening day of the season, when he was dismissed for a stamp on Tottenham’s Dele Alli.

Since then it has been former Arsenal man Isaac Hayden and Borussia Dortmund loanee Mikel Merino who have built up a partnership in the centre of the park.

The Spanish youngster has impressed with his passing quality and dynamic performances, which is well complemented by Hayden’s tenacity and defensive abilities.

Benitez says that he has had a talk with Shelvey, and says that the midfielder understands he has to improve in training before will be considered ahead of the midfield duo.

The Spanish manager told the Shields Gazette: “I’ve had another word with Jonjo, and he knows my idea.

“He knows the way to change things is every training session to show the quality that he has and what we are expecting from him.

“It’s quite difficult because they are doing well, all of them.

“You have to analyse your team, how we are doing and the other team and say: ‘OK, I will pick these two.’”

However, Benitez insists that Shelvey could line up alongside Merino, despite their similarities in playing style.

“I think they have quality, and, if tactically they understand the role of each other, then I can see it, yes,” he told the Shields Gazette.

Newcastle are currently on a three match winning streak, having picked up victories at home to West Ham and Stoke while also stealing a 1-0 win away at Swansea.

The Magpies’ impressive form saw them rocket up the table into fourth position, and they will be hoping to extend their run.

Their next match sees them travel down to the south coast to take on fellow promoted side Brighton on Sunday, where they will come up against former manager Chris Hughton.

In other Newcastle United news, Benitez has offered some stern advice to club captain Jamaal Lascelles.