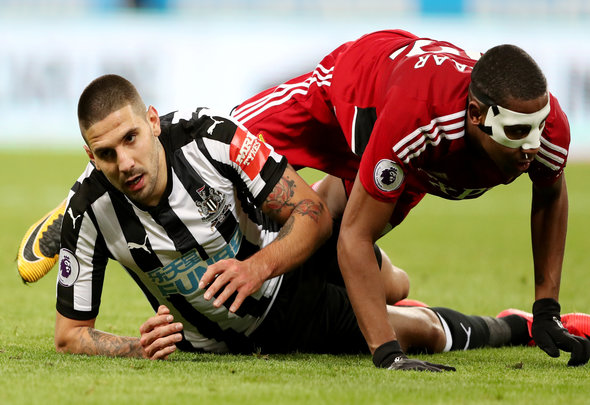 Newcastle United manager Rafael Benitez has said that striker Aleksandar Mitrovic will not be sold to a Premier League rival unless they offer £50million for his services.
The Serbian international has been heavily linked with a move away from St James’ Park this month after a frustrating first half of the season, with top flight rivals Brighton said to have tabled a £7million offer which was turned down by the Magpies.
However, Benitez has refuted suggestions that £15million might secure his signing, instead claiming that £50million would be the asking price if a fellow Premier League club were to enquire about signing the 23-year-old, as the Spanish boss emphasised his is looking to avoid strengthening the Magpies’ rivals.
He was quoted by the Chronicles Chris Waugh, via his personal Twitter account, as saying: “I have been clear with him & his agent that he will only leave if we sign players, & not to a Premier League rival.
“I see Brighton are interested, but we are not selling any player to any other PL club – unless they want to come with £50m.”

Rafa on Mitrovic: "I have been clear with him & his agent that he will only leave if we sign players, & not to a Premier League rival. I see #bhafc are interested, but we are not selling any player to any other PL club – unless they want to come with £50m…" #nufc

Mitrovic has struggled for game time this season, with just two goals in seven appearances across all competitions, not one of those coming as a start in the league, while he has been ruled out of action for the last nine games with a back injury.
Newcastle have had a quiet January transfer window, with just one arrival through the door at St James’ Park in the shape of Chelsea winger Kenedy, while there are yet to be any senior exits.
In other Newcastle United transfer news, the club are just £1.25million away from securing the signing of an international star.