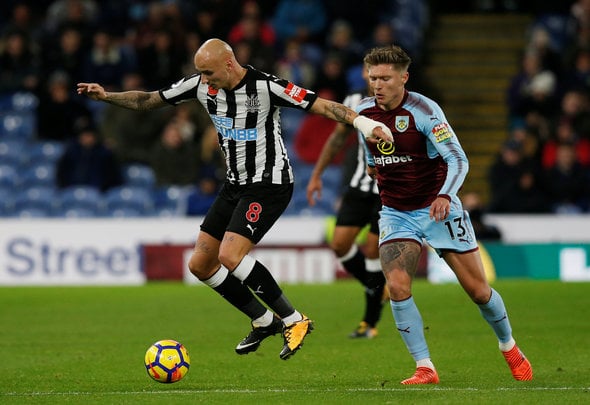 Newcastle United manager Rafa Benitez may be tempted to sell Aleksandar Mitrovic and Jonjo Shelvey to West Ham within the coming days if he manages to find replacements, according to a report.
The Mirror claims that the Hammers will have to wait until late in the transfer window before they can firm their interest in the Tyneside duo, but Benitez is said to be reluctant to let them leave to a fellow Premier League struggler.
However it is understood that Newcastle may let Mitrovic, 23, and Shelvey, 25, leave for West Ham if Benitez can sign a striker and a “pricey” midfielder within the coming days.
Mitrovic has made just seven appearances in all competitions for the Toon this season, scoring two goals in the process.
Shelvey has featured far more in Benitez’s plans, with 19 appearances in all competitions and scoring once.
However the ex-Swansea and Liverpool midfielder has been sent off more times than he has found the net.
The Magpies completed their first signing of the January transfer window on Tuesday when they snapped up Kenedy on loan from Chelsea.
Football Insider verdict
Mitrovic’s case at Newcastle is an odd one. Benitez has failed to find consistency from his strikers this season but has barely given the Serbia international a chance to shine. That should be a reason for West Ham to be wary over making a move for him, as their existing options at the London Stadium are perhaps better and less likely to kick up a fuss. Shelvey on the other hand has bags of talent but he does not show it enough. David Moyes may be able to get the best out of the England international, but he could command a big price-tag due to the standing he has in the Newcastle squad. It would be quite a bizarre move for the Hammers to snap up both of these players.
In other Newcastle United news, Mike Ashley has sanctioned the Magpies to swoop for this £7million left-back from a top six club.
We’ve launched a << BREAKING NEWS FEED>> exclusively for your club. ‘Like Us’ on Facebook by clicking here if you want 24/7 updates on all Newcastle United breaking news.