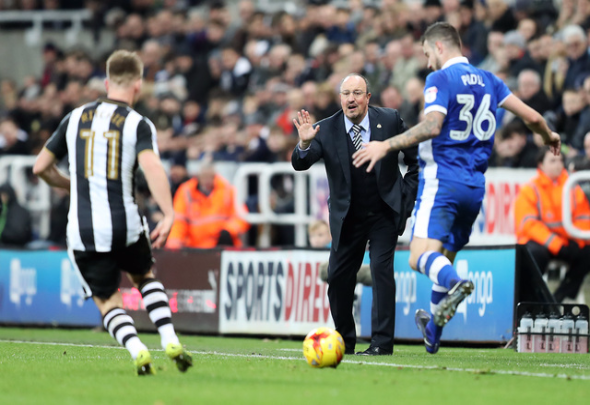 Rafa Benitez has defended the tactics he has employed at Newcastle this season which some fans have criticised as being too cautious.

The Magpies currently sit top of the Championship table, a point clear of second placed Brighton and seven clear of third placed Huddersfield, and look set to make an immediate return to the top flight.

Despite this success, some fans have been critical of Newcastle’s style of play, claiming it has been negative and not focused enough on attacking the opposition.

Benitez was quick to refute these claims, and addressed both the league and statistics table to support his defence.

He told the Chronicle: “You just have to look at our statistics and compare them to the other teams.

“We are top of the table and we score more goals than any other team in the division and don’t concede many – our goal difference is 38.

“Some people could look at our game plan away at Huddersfield and say it was too cautious.

“Football management means considering every opponent and every game in isolation and deciding what is the best way to win each game.”

Newcastle have flourished on the road, having won 13 of their 20 matches, but have struggled to replicate their impressive away form at home, and fans have been quick to voice their discontent.

Benitez understands the frustrations shown by the home fans, and insists his side are set to improve at St James’ Park.

He said to the Chronicle: “Those closest to you can often be the most critical.

“That is normal, they have earned the right to criticise and criticism is important for improvement.

“We have five games at home to improve and I’m convinced we will do it.”

Many fans have been frustrated by Benitez’s insistence of only playing one striker, with the likes of Dwight Gayle, Aleksandar Mitrovic and Daryl Murphy at his disposal.

However, he backs his decision to stick with a sole striker, pointing at how his team selection is affected by both fitness and how it would affect the dynamics of those on the pitch.

“It depends on the players in the squad, who is fit, who is training well,” said Benitez to the Chronicle.

“To play with two strikers could be negative if that means you lose the control in other parts of the pitch.

“To change our shape, it could be right, or maybe not – what we are doing is working.”

The Spanish manager has been in charge of Newcastle for just over a year, and he says that the club is set for a bright future, but insists that the first priority is winning their spot back in the Premier League.

However, with eight games left to play, Benitez also recognises that winning automatic promotion is not a given, and urges the fans to back the side during the final stage of the season.

He told the Chronicle: “The fans are incredible, the stadium is superb, the staff, everything is in place to allow this club to achieve great things.

“First, we have to remain focused on only one thing and that is securing promotion.

“The key is to help the players to try again, to be sure they have the confidence and support to succeed in these final eight games.”

In other Newcastle news, this Toon striker says he had offers to leave, but stayed because of a summer signing.