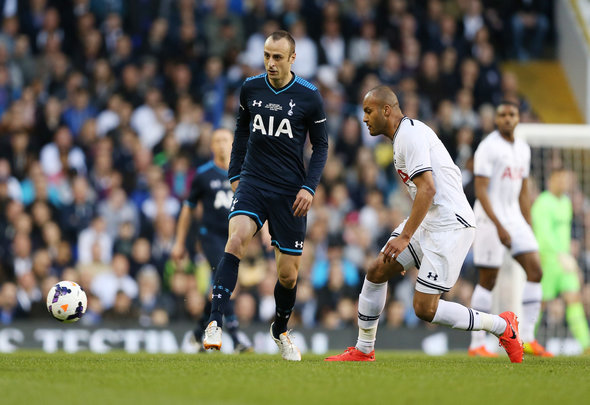 Former Tottenham striker Dimitar Berbatov has admitted he had never heard of the club when he signed for them but says he loves watching the current Spurs stars in action.

The Bulgarian forward arrived at White Hart Lane in the summer of 2006 from German side Bayer Leverkusen, going on to net 46 times in 102 appearances and becoming a cult hero for the Spurs faithful, helping the club pick up the League Cup during his time there.

He left for Manchester United two years after his arrival, and has gone on to play for the likes of Fulham, Monaco and current side Kerala Blasters in the Indian Super League.

However, the 36-year-old shockingly admitted he did not have a clue who he was joining when he arrived in England over a decade ago, and that he was initially reluctant against making the move.

Now though, Berbatov says the club will become one of the most recognised clubs across Europe thanks to the likes of Harry Kane and Mauricio Pochettino, who are bringing success to the Lilywhites.

He told the Sun: “I remember speaking to my agent and he was like, ‘We have offers from this club’, and I was like, ‘Who?’

“My world at the time was Germany and Leverkusen. I said, ‘I want to stay here. This is my home’.

“I think in a couple of years they (Tottenham) will be one of the biggest teams in Europe.

“They are building a great stadium, they have a great squad, a great coach, the training ground is fantastic. They have everything to be a great team.

“Kane is the captain, he is Mr Spurs there.”

Berbatov admitted that the club need to pick up some silverware, with their League Cup win back in 2008 their last major trophy.

They currently sit third in the Premier League table, eight points behind Manchester City, while they have also secured their place in the Champions League knock out stages thanks to an unbeaten start in their first four group matches.

In other Tottenham news, Mark Lawrenson has left his prediction for the north London derby clash against Arsenal on Saturday.