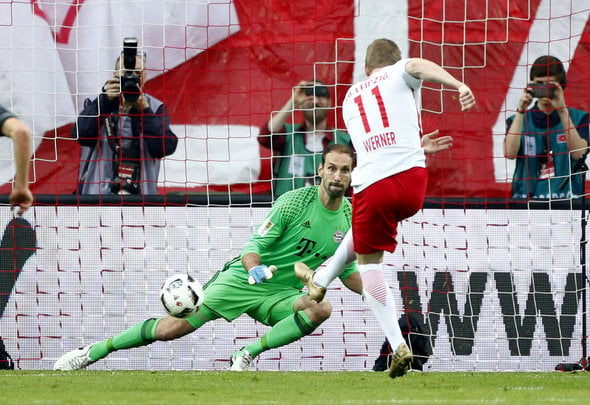 Everton have been installed as the favourites to sign RB Leipzig goal machine Timo Werner, according to the latest bookmakers’ odds.

Bet Victor have priced the Toffees at just 4/1 to land the 21-year-old striker just hours before Thursday’s transfer cut-off.

Merseyside rivals Liverpool are priced closely behind alongside Tottenham, AC Milan and Bayern Munich with the four giants sharing odds of 8/1. Werner’s odds come with Everton reportedly on the lookout for a new frontman to replace departed star Romelu Lukaku.

There have been links to such strikers as Swansea’s Fernando Llorente, Leicester’s Jamie Vardy and Cardiff’s Kenneth Zohore.

However, there have not yet been any reports linking Everton with a move for Werner.

But, given that the youngster scored a very impressive 21 goals in 31 Bundesliga matches in the last campaign it would be no surprise to see a Premier League side make a move for the six-time capped Germany international.

Werner has also continued in the 2017-18 campaign as he left off in the last season with three goals from his first three matches in all competitions.

He is however still contracted to RB Leipzig until 2020 and given the Bundesliga side’s money they are unlikely to allow the forward to leave without a fight, as Liverpool experienced with Naby Keita this summer.

In other Everton transfer news, a Premier League giant has entered advanced talks with a striker wanted by the Toffees.