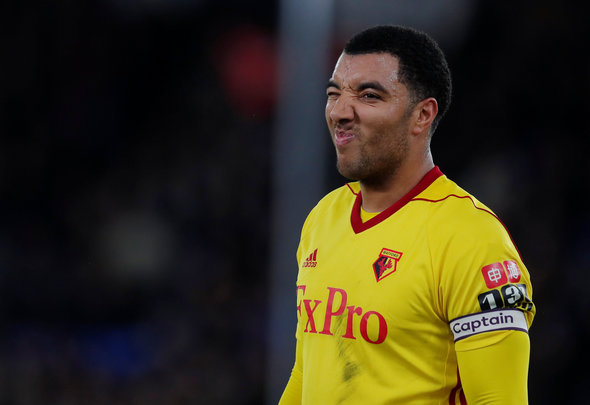 Everton and Newcastle are joint favourites to sign Watford striker Troy Deeney in January, according to the latest bookmakers’ odds.

BetVictor have opened the market on Deeney, 29, to leave Vicarage Road in January and have the Toffees and Magpies both priced at 4/1 to land the Hornets target man next month.

Leicester (10/1) and West Brom (10/1) are also thought to be in the running to sign the Watford striker by the time the upcoming transfer window slams shut.

Freelance reporter Paul Brown, who also works for the Express, claimed on his personal Twitter account earlier this month that Everton are likely to make a bid for Deeney in January.

Newcastle are also highly expected to be in the hunt for a striker next month as Rafa Benitez again tries to improve on the squad that won the Championship title last time out.

Deeney has found himself out of favour at Watford this season and has started just seven times in the Premier League.

The powerhouse striker, who is known for his incredible strength and aerial ability, has scored just twice in 14 appearances across all competitions and is currently serving a three-game suspension for a red card he received i the 4-1 defeat to Huddersfield earlier this month.

In other Everton news, the Toffees must sign this defender who has been compared to John Stones and is wanted by a clutch of Premier League sides, including Newcastle.